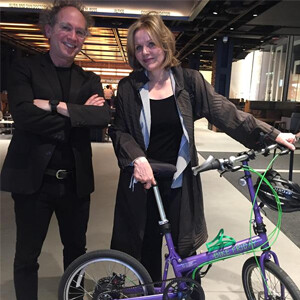 Legendary soprano Renée Fleming performs a new version of Tod Machover’s Gammified, titled VocaGammified, written for her and presented as part of Cal Performances’ digital series Illuminations—“Music and the Mind.” The performance premieres on April 29 and remains available on-demand through July 28. Gammified was originally commissioned by The Kronos Quartet and was recently added to the Kronos’ growing online compendium of its massive commissioning project “Fifty for the Future.” The Kronos’ new recording of Gammified, along with full score and parts available for download, Machover’s program notes, a video interview and more, are now available online.

Gammified is a piece for string quartet and electronics that uses cutting-edge research from the MIT Media Lab, where Machover is Muriel R. Cooper Professor of Music and Media. The piece’s electronic track features Gamma frequencies, which have begun to show highly promising results for resynching the brain, promoting mental wellbeing and reversing the symptoms Alzheimer’s disease. Machover and Fleming are both engaged in exploring the connections between music and health, and after listening to a recording of the Kronos Quartet’s premiere performance of Gammified, Fleming asked Machover if he’d be interested in creating a version with a vocal line for her. The new piece, for string quartet, voice and electronics, was commissioned for Fleming by Cal Performances as part of her “Music and the Mind,” series, ongoing creative collaborations with researchers, scholars, and scientists; the digital program also includes a discussion with UC Berkeley professor of neuroscience Ehud Isacoff. 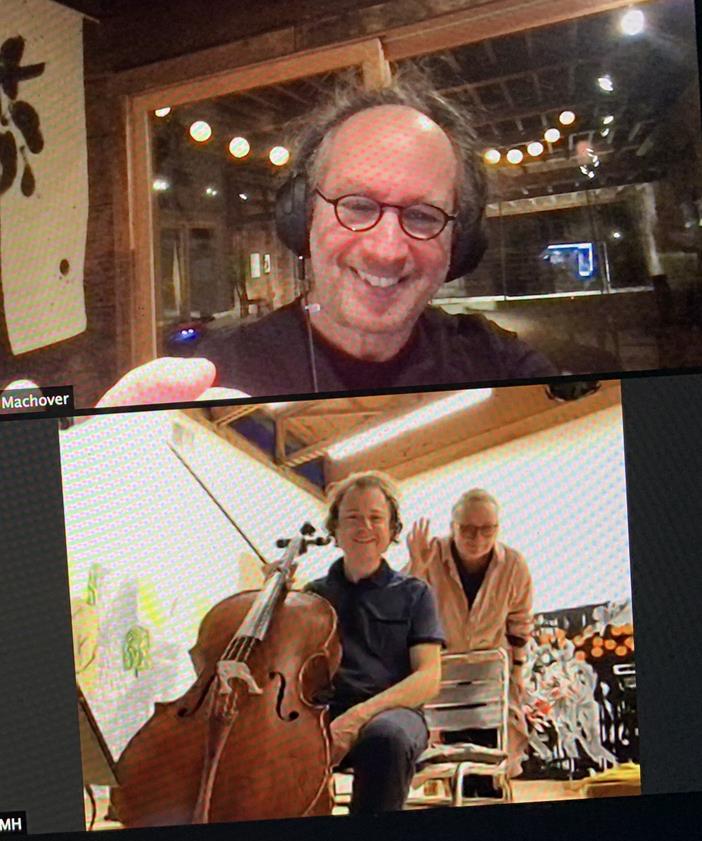 Sorta Voce was commissioned by cellist Matt Haimovitz as part of his new “Primavera Project,” and will appear on the first CD release of the project on the PENTATONE label in June 2021.  Haimovitz’s project is a collaboration of music and art inspired by one of the most widely admired and enigmatic paintings of the Renaissance, Botticelli’s Primavera (ca 1480), and the reimagining of the Primavera by world-renowned contemporary artist Charline von Heyl in her own large-scale painting. Haimovitz says, “In our new reality of the global pandemic and social upheaval, both Primavera paintings’ composition, characters, symbolism, nature and flora, darkness and light, mythology, identity, and spirituality are ripe for reflection and new interpretations. Each composer has been asked to compose a work interpreting the paintings from a present-day perspective, embracing our shared humanity and contributing to a contemporary culturally relevant Renaissance.”

Machover’s Sorta Voce, composed in early 2021, is for unamplified solo cello, with an optional vocal obligato by the cellist. Like Botticelli’s painting, it explores the power and ambiguity of breath – both from the mouth and using a new cello technique developed by Machover – which the composer says “can destroy as well as sustain, begin life as well as end it.” Sorta Voce is both very rapid and very quiet, often on the edge of inaudibility and on the verge of revealing the simple, haunting melody that ties the piece together and is heard in entirety only near the end of the work. In this way, Sorta Voce explores the will to persist, the longing for rebirth after tough times, and the acceptance of life’s constant ebb-and-flow.

PBS NewsHour segment on Tod Machover and Death and the Powers

Machover’s highly-acclaimed, groundbreaking opera Death and the Powers was developed at the MIT Media Lab and premiered in the U.S. in 2011. It is a one-act, full-evening work that tells the story of Simon Powers, a successful and powerful businessman and inventor, reaching the end of his life and facing the question of his legacy. He is now conducting his final experiment, passing from one form of existence to another, while his family, friends, and associates must decide what this means, whether or not he is actually alive, how it affects them, and whether to follow. The opera showcases visionary Media Lab performance technologies like Disembodied Performance, which translates Simon Powers’ offstage presence into an expressively animated stage, a musical Chandelier, and a chorus of robots.

Machover co-produced the CD with Grammy-nominated producer and MIT grad [PhD 2019] Ben Bloomberg.  The CD will be issued in 2-layer SACD, including both stereo and 5.1 surround-sound versions. In addition, full Dolby Atmos multi-dimensional surround-sound versions will also be available for digital streaming or download. The new recording features the original cast of Death and the Powers – including James Maddalena, Joélle Harvey and Patricia Risley, among others – and the Boston Modern Orchestra Project conducted by Gil Rose. Technology by the MIT Media Lab.

A Look Ahead at Machover’s Future Projects 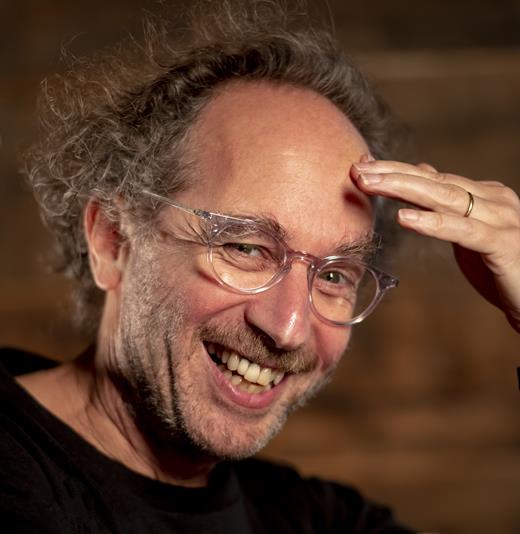 Called “America’s most wired composer” by The Los Angeles Times and a “musical visionary” by The New York Times, Tod Machover is recognized as one of the most innovative composers active today, and is celebrated for inventing new technologies that expand music’s potential for everyone, from celebrated virtuosi to musicians of all abilities. Machover studied with Elliott Carter and Roger Sessions at The Juilliard School and was the first Director of Musical Research at Pierre Boulez's IRCAM in Paris. He is Academic Head of the MIT Media Lab (Cambridge USA), where he is also Muriel R. Cooper Professor of Music and Media and Director of the Opera of the Future Group. Machover is also Visiting Professor of Composition at the Royal Academy of Music in London, and Visiting Professor of Composition at the Curtis Institute of Music.

Machover is especially known for his visionary operas. His most recent opera, Schoenberg in Hollywood, was commissioned and presented by Boston Lyric Opera and had its hugely successful world premiere in Boston in November 2018. The opera travels next to the Vienna Volksoper in April 2022 (rescheduled from April 2020).

Machover’s previous operatic works – as varied as they have been groundbreaking – include VALIS (1987), based on Philip K. Dick’s sci-fi classic and commissioned by the Centre Pompidou in Paris; Media/Medium (1994), premiered by magicians Penn & Teller; Brain Opera (1996/8), based on the work of AI pioneer Marvin Minsky and which invites the audience to collaborate live and online; Resurrection (1999), commissioned by Houston Grand Opera and based on Tolstoy’s final novel of the same name; Skellig (2008), based on David Almond’s award-winning novel and premiered at the Sage Gateshead; and the “robotic” Death and the Powers with an original libretto by Robert Pinsky, which premiered in Monaco during the 2010-2011 season at the Opéra de Monte-Carlo under the patronage of Prince Albert II, and has since been performed in Boston, Chicago, and at The Dallas Opera, where, in February 2014, it received the world’s first international, interactive simulcast using specially developed technologies to allow viewers to interact with the performance onstage through smartphones, tablets, and other portable electronic devices. Death and the Powers was also Finalist for the 2012 Pulitzer Prize in Music, and has been released for worldwide distribution on Blu-Ray disc. A CD recording of Death and the Powers is scheduled to be released in September 2021 by BMOP/Sound.

In a wholly original and flourishing series of collaborative “City Symphonies,” Machover invites people of all ages and backgrounds to work with him – using specially designed online tools, smartphone apps, and public workshops and forums – to create a musical portrait of their city, by combining “normal” musical resources with sounds discovered and collected in that place. He has written works in this series for and with the cities of Toronto, Edinburgh, Perth (Australia), Lucerne (Switzerland), Detroit, and Philadelphia. Upcoming City Symphonies are being planned for Chennai (India), South and North Korea, and various U.S. destinations.

In 2018, the most recent “City Symphony,” Philadelphia Voices, made its widely-acclaimed world premiere with Yannick Nézet-Séguin conducting the celebrated Philadelphia Orchestra and hundreds of singers from all over Philadelphia, and went on to its New York debut at Carnegie Hall (the first City Symphony to be played outside its city of origin). Machover’s earlier Eine Sinfonie für Luzern debuted to great critical acclaim at the Lucerne Festival in 2015, where he served as the 2015 Composer in Residence. Later that year, it was also in Lucerne that Machover debuted Symphony in D, described by Hyperallergic as “a cacophonous love letter to Detroit,” with the Detroit Symphony Orchestra under the baton of Leonard Slatkin. Subsequently, a documentary by Dennis Scholl and Marlon Johnson, which had documented the process of making Symphony in D, debuted at the Miami Film Festival in March 2017 before winning an Emmy as best Cultural Documentary (Michigan chapter). A video performance of Machover’s first City Symphony, A Toronto Symphony, was recorded by the MIT Symphony Orchestra in March 2020 – the evening before MIT shut for the pandemic – and is available for streaming online.

Tod Machover is renowned for designing new technologies for music performance and creation, such as Hyperinstruments, “smart” performance systems that extend expression for virtuosi, from Yo-Yo Ma to Prince, as well as for the general public. The popular video games Guitar Hero and Rock Band grew out of Machover’s Lab. His Hyperscore software—which allows anyone to compose original music using lines and colors—has enabled children around the world to have their music performed by major orchestras, chamber music ensembles, and rock bands. Recently, the globally-renowned Kronos Quartet – as a part of its initiative 50 for the Future: The Kronos Learning Repertoire, a commissioning and education project in partnership with Carnegie Hall and others – presented the first public performance of Machover’s Gammified and added the piece to its online collection. Using cutting-edge research from the MIT Media Lab, the piece for string quartet and electronics features compositional-embedded Gamma frequencies, which have begun to show highly promising results for resynching the brain, promoting mental wellbeing, and reversing the symptoms Alzheimer’s disease. Gammified – and the brand new VocaGammified for soprano Renée Fleming - exemplifies Machover’s longtime devotion to discovering theories, techniques and tones that allow music to promote wellbeing, to combat disease, and to stimulate recovery, from Alzheimer’s to depression to a variety of COVID-related conditions.

Tod Machover’s music is published by Boosey & Hawkes and Ricordi Editions, and has been recorded on the Bridge, Oxingale, Erato, Albany and New World labels. Much of his music is also available via Apple Music, Amazon Music, and on YouTube, SoundCloud and Spotify.