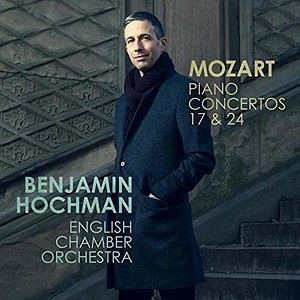 I chose to record these two concertos because to me they are mirror images of each other. The G major is full of sunshine and joy, but it also has these moments of darkness that show complexity, whereas the C minor is essentially tragic, full of fury and storm, yet it also has moments of calm and resignation, including much of the slow movement. Also, the last movements of the two concertos are both in variation form- the only two final movements of Mozart Piano Concertos that are variations. For these reasons, the two concertos really complement each other very well.

Winner of the prestigious Avery Fisher Career Grant in 2011, Benjamin’s Mozart immersion extends to a Complete All-Mozart Sonata Project over the course of two seasons (2018-2019 and 2019-2020).  This season, Mr. Hochman presents the complete Mozart Piano Sonatas at the Israel Conservatory in Tel Aviv and continues his traversal of the cycle at Bard College Conservatory., where he serves on faculty.

Recorded in April 2019 at St. John Smith Square, London, the disc was engineered by Dennis Patterson and produced by Eric Wen.

Of his previous album, Russell Platt of the New Yorker said, “Variations (Avie), is another testament to his talent… There is something feline and elusive about this artist, as if he were providing us with but a portion of his capacious musical imagination. I look forward to sampling more of it.”