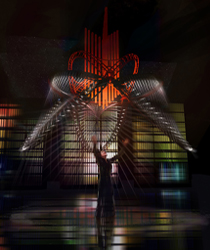 The Dallas Opera launches an unparalleled new initiative combining opera and technology with the first-ever global interactive simulcast of an opera. Death and the Powers, written by acclaimed American composer, inventor and professor at the MIT Media Lab, Tod Machover, receives its Dallas Opera premiere performances in the Margot and Bill Winspear Opera House at the AT&T Performing Arts Center on February 12, 14, 15 and 16. On Sunday, February 16th at 2:00 pm Central Time, the opera will be simulcast to ten locations in the U.S. and abroad.  The work was named a 2012 Pulitzer Prize Finalist in Music for both its score and the innovative technology created by Machover and his Opera of the Future Group at the MIT Media Lab.

The libretto for Death and the Powers was written by former U.S. Poet Laureate Robert Pinksy from a story by Pinsky and Randy Weiner and the production is directed by the Tony-award winning Diane Paulus, who is renowned for her talent in delivering adventurous productions with palpable audience appeal, as in her recent revivals of HAIR, Porgy and Bess and Pippin on Broadway. Ms. Paulus is joined by choreographer Karole Armitage and production designer Alex McDowell, who is best known as the creative director of films such as Man of Steel, Minority Report and Charlie and the Chocolate Factory.

INTERACTIVE MOMENTS & The DEATH and the POWERS MOBILE App

For the first time in history on February 16, 2014 at 2:00 pm Central Time, remote audience members across ten worldwide locations will experience live, enhanced streaming and interactive moments through a specially designed, downloadable app, entitled Powers Live. Created by Tod Machover and the MIT Media Lab,Powers Live is designed to work on any smartphone or tablet supporting Apple iOS 6 and 7 and Android 4.0 and higher. During choreographed segments throughout the opera, remote audiences will receive additional audio, video and multimedia content flashed to their mobile devices. The added content will allow audience members the ability to virtually experience the main character’s thoughts and bring the sights and sounds of the live performance in Dallas “within reach”. Additionally, HD cameras placed throughout the set and upon various electronic props will provide a “robot’s eye-view” and a more in-depth perception of the opera.

The Dallas Opera’s central architectural and design element of the Winspear Opera House is the “Moody Foundation Chandelier”.  Using the mobile app, remote audience members can affect The Moody Foundation Chandelier’s illumination, shape and motion in real time during significant moments in the opera by sending commands through their mobile devices.  The audience seated in the Dallas opera house will feel the presence of others watching the opera around the world as they witness the chandelier’s dramatic changes.

Described by The Wall Street Journal as having “Passionate intensity, full-bodied arias in a post-organic world,” Death and the Powers blends Machover’s artistic and technological expertise to create an inventive score filled with arching melodic lines, richly nuanced textures and propulsive rhythms. Characterized by Opera magazine as, “A grand, rich, deeply serious new opera,” Death and the Powers tells the story of Simon Powers, a successful and powerful business man, who wishes to perpetuate his existence beyond the decay of his natural being. Nearing the end of his life, Powers seizes his one chance for immortality by downloading his consciousness into his environment, creating a living version of his mind and spirit, called “The System.”

The Dallas Opera production of Death and the Powers, supported in part by the National Endowment for the Arts and the Aaron Copland Fund for Music, features an animatronic stage, a surround sound system with hundreds of speakers, nine semi-autonomous singing robots and an over-sized, specially designed-and-constructed chandelier that emulates the human voice and responds to physical touch.

The Global Interactive Simulcast is the latest development in a strategic approach in expanding the Dallas Opera’s community footprint and raising its international profile.  Beginning with Dallas Opera’s first simulcast at Annette Strauss Square in 2010 and proceeding to venues such as AT&T Stadium (home of the Dallas Cowboys) and Klyde Warren Park, the company has exposed tens of thousands of new patrons to the art form in a relatively short period of time.

DEATH AND THE POWERS
by Tod Machover

An opera in one act with libretto by Robert Pinsky,
based on a story by Pinsky and Randy Weiner

Single tickets and subscriptions for The Dallas Opera’s 2013-2014 Season are available by visitingwww.dallasopera.org or by calling 214-443-1000