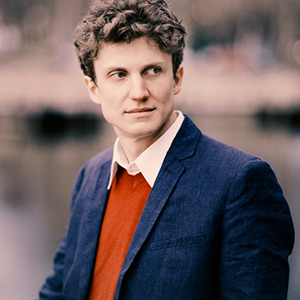 Zoltán Fejérvári has emerged as one of the most intriguing pianists among the newest generation of Hungarian musicians. Winner of the 2017 Concours Musical International de Montréal and recipient of the prestigious Borletti-Buitoni Trust Fellowship in 2016, Zoltán Fejérvári has appeared in recitals throughout the Americas and Europe, at prestigious venues including Carnegie Hall, Canada’s Place des Arts, Gasteig in Munich, Lingotto in Turin, Palau de Música in Valencia, Biblioteca Nacional de Buenos Aires, and Liszt Academy in Budapest.  He has performed as a soloist with the Budapest Festival Orchestra, Hungarian National Orchestra, Verbier Chamber Orchestra, and Concerto Budapest, and he has collaborated with such conductors as Iván Fischer, Gábor Tákács-Nagy, Ken-Ichiro Kobayashi, and Zoltán Kocsis. Fejérvári’s solo recording debut, Janáček, released in January 2019, earned rave reviews as “the most sensitive and deeply probative recording” of that composer’s work (Gramophone). His latest recording, Schumann, was released for the Atma Classique label in May 2020 and was again praised by Gramophone: "Fejérvári is a deeply communicative artist who combines an imperturbable yet magisterial command of his instrument with impeccable musicality. Those who have yet to hear him are in for a rare treat."

In addition to a return to the Santa Fe Chamber Music Festival, the 2021-2022 season brings Fejérvári’s orchestral debuts with the Czech Philharmonic in performances of Bartók’s Concerto No. 3 and the Royal Concertgebouw Orchestra with Ivan Fischer in performances of Bartók’s Concerto No. 1. Additionally he appears in recital with Wigmore Hall (London, UK), La Jolla Music Society (La Jolla, CA), Harvard Musical Association (Boston, MA), the Cosmos Club (Washington, DC), and the Steinway Society the Bay Area (San Jose, CA).

Past seasons’ recital highlights have included Classical Spree, the festival of the Montreal Symphony Orchestra; contemporary and Baroque concerti at Lucerne Festival at the request of Sir András Schiff, a longtime mentor to Fejérvári; Gilmore Keyboard Festival Rising Stars series; and Vancouver Recital Society in British Columbia. Schiff chose Fejérvári to participate in “Building Bridges,” a series established to highlight young pianists of unusual promise.  Under this aegis Fejérvári gave recitals during the 2017-2018 season in Berlin, Bochum, Brussels, Zurich, Ittingen, among other cities.

As a chamber musician, Fejérvári has performed with the Elias Quartet presented by the Liverpool Philharmonic Orchestra, with Joshua Bell and Nicolas Alsteadt presented by the Liszt Academy, and with violinist Diana Tishchenko in Aix-en-Provence and La Chaux-de-Fonds. He was also a guest at the Brooklyn Chamber Music Festival. Fejérvári has also collaborated with the Keller and Kodály Quartets; violinists Joseph Lin and András Keller; cellists Gary Hoffman, Christoph Richter, Ivan Monighetti, Frans Helmerson, and Steven Isserlis; and horn player Radovan Vlatković. Fejérvári has appeared at Kronberg’s Chamber Music Connects the World program; Prussia Cove’s Open Chamber Music; Lisztomania at Châteauroux, France; the Tiszadob Piano Festival in Hungary; and Encuentro de Música in Santander, Spain.  At the invitation of artistic director Mitsuko Uchida, he participated in the Marlboro Music Festival in the summers of 2014 and 2016. Fejérvári also toured throughout the United States with Musicians from Marlboro in the 2017-18 and 2018-19 seasons.

Zoltán Fejérvári’s solo piano album debut, Janáček, was released on the Piano Classics label in 2019. It features performances of On an Overgrown Path, in the Mists, and Piano Sonata 1.X.1905. In 2013 his recording of Liszt’s Malédiction with the Budapest Chamber Symphony, for Hungaroton, was awarded the Grand Prix du Disque.  The recording was followed by a CD of four sonatas for piano and violin by Mozart with violinist Ernő Kállai, issued in 2014 by Hungaroton. Fejérvári was also featured on a 2020 album release of sonatas by Ravel, Enescu, Ysaÿe and Prokofiev alongside violinist Diana Tishchenko entitled Strangers in Paradise on the Warner Classics label.

“Fejérvári’s playing is multi-layered and precise, requiring full concentration on the part of the audience. Every note has its own particular dynamic, character, and expression.” – Kulturvollzug

“Fejérvári’s rendition of Schumann was tender, philosophical, and somewhat introspective, but he played with great passion where necessary. He interpreted the slow movement with a speaking rubato and showed us his Florestanian temperament in the last movement, which made the performance truly authentic.” – Muzsika

“[Fejérvári] evidenced dazzling technique that can rank with the best piano virtuosi and his interpretive instincts were consistently revelatory. He imbued even the most overt display pieces with subtlety and aristocratic insight.” – South Florida Classical Review