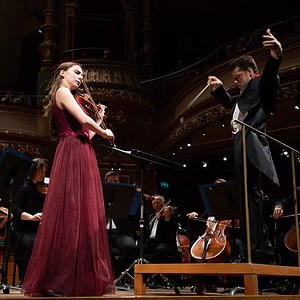 The Menuhin Competition Trust and the Richmond Symphony today announced the 44 competitors selected from a pool of 321 applicants to participate in the biennial Menuhin Competition, the world’s leading international competition for young violinists. The Competition, which is held every two years in a different location, is hosted this year in Richmond, Virginia, by a consortium of local institutions headed by the Richmond Symphony together with the City of Richmond, VPM, Virginia's home for public media, the University of Richmond and Virginia Commonwealth University.

The selected competitors – 22 Juniors (ages 15 and under) and 22 Seniors (ages 21 and under) – reflect the incredible diversity and prodigious global talent that distinguishes the Menuhin Competition as “the Olympics of the Violin.” (A complete list of competitors is below.) These extraordinary young musicians – representing 18 nationalities in 16 countries of residence across North and South America, Europe, Asia and Australia, and 13 states within the U.S. – will gather in Richmond in May 2020 not only to participate in Competition events, but to be immersed in music among peers, mentors and audiences, with masterclasses, panel discussions, workshops, concerts and engagement activities.

Gordon Back, Artistic Director of the Menuhin Competition and Chair of the pre-selection jury that identified this year’s competitors, says, “The applicants are so accomplished at such a young age that it becomes more challenging every year to select the 44 competitors; the youngsters play at an exceptional level both musically and technically.” The dedicated pre-selection jury spent hundreds of hours considering each application individually before making their decisions. Back says, “Each of the competitors who was selected brought some exceptional quality that distinguished them in a field of outstanding applicants. We look forward to seeing and hearing them at the Competition this year in Richmond.”

Mayor Levar M. Stoney, who was instrumental in bringing the Menuhin Competition to Richmond, said, “The City of Richmond is honored to be hosting the 2020 Menuhin Competition, and we can’t wait to witness the talent of these 44 exceptional musicians from around the world on display in our arts-centric city. We are especially excited for the opportunities during the Competition to share the gift of music in our schools and with our community, and perhaps inspire the next generation of great violinists right here in Richmond and the Commonwealth of Virginia.”

Governor Ralph Northam and First Lady of Virginia Pamela Northam are Honorary Patrons of the Menuhin Competition Richmond 2020. “The Governor and I are pleased that the prestigious Menuhin Competition, an international celebration of music and youth, will take place in Virginia’s capital city this year,” said First Lady Pamela Northam. “The Commonwealth is proud to host these distinguished young violinists, including a Virginia participant! We look forward to welcoming the many visitors from around the world that the 2020 ‘Olympics of the Violin’ will bring.”

About the Richmond 2020 competitors

The 44 competitors in the Menuhin Competition Richmond 2020, ranging in age from 11 to 21, come from around the world: Australia, Brazil, Canada, China, France, Germany, Italy, Japan, Poland, Russia, Singapore, South Korea, Spain, Switzerland, Taiwan, Ukraine, the United Kingdom and the United States. Of those who are in the United States, they hail from California, Florida, Illinois, Kansas, Massachusetts, New Jersey, New York, Ohio, Pennsylvania, South Carolina, South Dakota, Texas and from the home of this year’s Competition, Virginia. See below for a complete list of Junior and Senior competitors.

In their personal statements, many competitors talk about being selected for the Competition as a dream come true, having watched previous competitions on YouTube. By and large, there is not much talk of “winning.” In fact, quite a few specifically say that just being invited to attend is a huge win. They are universally excited about meeting their violin heroes, but they’re also looking forward to meeting other young people who are, as 13-year-old Edward Walton put it, “as enthusiastic about playing the violin as I am.” Another 13-year-old, Boha Moon, takes a more philosophical approach, saying, “I think participating in the Menuhin Competition is a bit like climbing a tall mountain. It’s important not to rush but to enjoy the excitement and challenges of the mountain!... As the old Korean saying goes, ‘No one can beat the one who enjoys it!’”

“Brett and Eddy’s passion not only for making music, but for making music fun, inspires the next generation of musicians like few others have,” said James Wiznerowicz, Interim Senior Associate Dean of VCU's School of the Arts. “We are so thrilled to have them join us at the Menuhin Competition in Richmond, where we believe they will amplify the Competition’s commitment to sharing and learning and introduce a whole new audience to the joys of this remarkable event while it’s here in Richmond this year.”

The duo will be sharing news from the Competition on their social media channels and will participate in an event at VCU featuring motion-capture technology (in which human movement is captured digitally) on May 23.

Menuhin Competition Richmond 2020 in the Community

The Competition’s founder, Yehudi Menuhin, had a vision of the Competition as an event that would inspire the next generation of violinists, especially in the places where the Competition is held. To stay true to that vision, the partners of the Menuhin Competition Richmond 2020 will present several special events around the city and beyond, to bring the visiting artists and young competitors – as well as the excitement of the Competition – to people all over the Richmond area and throughout Virginia.

On Saturday, May 2, Virginia Commonwealth University (VCU) will present “Violin Day” for students (K-12) from across Virginia. Throughout the day, pre-eminent fiddler and pedagogue Mark O’Connor will lead jam sessions, clinics, workshops and masterclasses for children (grouped by age and ability). There will also be student performances, a mini-competition and a short performance by Mark & Maggie O’Connor (preceding their full-length evening concert at the Byrd Theatre on May 20). All events will take place at VCU’s Singleton Center. O’Connor will return to Singleton Center on Sunday May 3, for a day of professional development for teachers, introducing them to his highly acclaimed “O’Connor Method” for string teachers. Participants will be eligible to receive recertification credit for their attendance. More details and registration coming soon.

In addition, Richmond 2020 competitors and guest artists will visit elementary and secondary schools throughout the region to share their experiences, hold workshops and perform for students. This is an unparalleled opportunity for local children to see, meet and be inspired by extraordinary violinists their own age and to benefit from encounters with exceptional professional musicians.

On Saturday, May 23, the Virginia Museum of Fine Arts is the venue for a special art-and-music program, “Portrait of the City.” Works of art, created by students from the Richmond region, celebrating different aspects of the City of Richmond will be on view. The renowned Sphinx Virtuosi, Artists-in-Residence for the Competition, will also perform alongside student winners of the Violin Day mini-competition.

Selected Richmond 2020 Events to be Livestreamed on VPM

VPM, Virginia’s home for public media, will provide livestream coverage of every competitive round, the Opening and Closing Gala concerts and the day of jury masterclasses. VPM will also offer local public radio and television broadcasts of select performances. All live coverage can be accessed through menuhincompetition.org and vpm.org.

The Richmond Symphony is offering a special Menuhin Experience Package which is now available only at richmondsymphony.com or by calling 804-788-1212. Reserve tickets to two or more select concerts by April 1, 2020 and save 10%.

For the full list of events and to purchase tickets, please visit:
https://2020.menuhincompetition.org/program-tickets/ 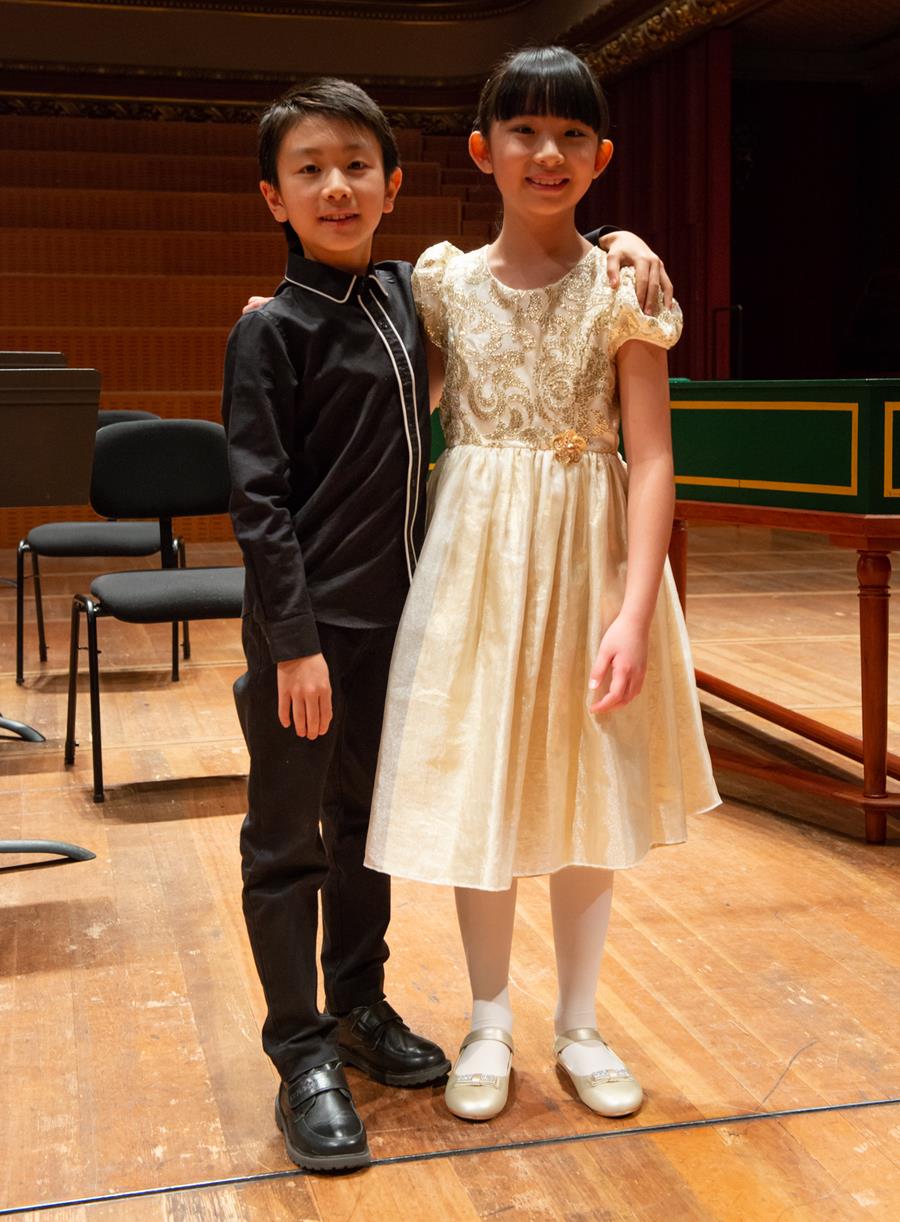 Breakdown of Competitors by Nationality*
*Competitors who represent multiple nationalities are listed under all countries.

18 from the United States
9 from South Korea
6 from Japan
4 from China
3 from Canada
2 each from Germany, Taiwan and the United Kingdom
1 each from Australia, Brazil, France, Italy, Poland, Russia, Singapore, Spain, Switzerland and Ukraine

Junior Competitors*
*Information in parentheses indicates place of residence when different from nationality.
Square brackets indicate a US State, where applicable.

Senior Competitors*
*Information in parentheses indicates place of residence when different from nationality. Square brackets indicate a US State, where applicable.

About TwoSet Violin
TwoSet Violin – founded in 2014 by Australian duo Brett Yang and Eddy Chen – first went viral with their funny and sometimes painfully accurate videos depicting life as a classical musician. With over 3.5 million followers on social media and over 400 million views worldwide, TwoSet inspires musicians worldwide with humor and a relatable ‘imperfectness.’ They have been featured on international media such as China Times, ABC News, The Violin Channel, Classic FM, ABC Classic FM, Sony Classical Australia, WQXR and The Strad. Their work has led to collaborations with other high-profile artists such as Lang Lang, Hilary Hahn, Janine Jansen, James Ehnes, Maxim Vengerov, Ray Chen and Anne Akiko Meyers. At the end of 2016, the duo gave up their spots in the Sydney and Queensland Symphony Orchestras and began hosting live classical comedy performances, including a sold-out debut at the Sydney Opera House. Their one-of-a-kind show offers a unique and interactive experience, creatively integrating humor with actual recital—all while upholding the integrity of classical music. Unlike a typical classical concert, TwoSet Live attracts a diverse crowd, including young fans as well as those who have never been to a classical concert before.

About the Menuhin Competition Trust
The Menuhin Competition is the world’s leading international competition for young violinists, held every two years in a different city (most recently in Geneva in 2018, London in 2016, Austin, Texas in 2014, Beijing in 2012 and Oslo in 2010). Founded by Yehudi Menuhin in 1983 the Competition attracts hundreds of entries from countries across the globe, choosing only 44 of the world’s very best young violinists to participate. The Competition discovers, encourages and nurtures exceptionally talented young musicians from all corners of the globe under the age of 22 to develop into the next generation of great artists.