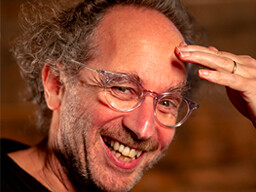 Called “America’s most wired composer” by The Los Angeles Times and a “musical visionary” by The New York Times, Tod Machover is recognized as one of the most innovative composers active today, and is celebrated for inventing new technologies that expand music’s potential for everyone, from celebrated virtuosi to musicians of all abilities. Tod Machover is especially known for his visionary operas, which frequently incorporate groundbreaking technologies developed by Machover and the MIT Media Lab to expand the expressive potential of performance and staging and to bridge the gap between performers and audience.

September 14, 2021
New Recording of Death and the Powers on BMOP/Sound

On September 14, Machover’s highly-acclaimed, groundbreaking 2011 opera Death and the Powers will be available on BMOP/sound. The recording, which Machover co-produced with Grammy-nominated producer and MIT grad [PhD 2019] Ben Bloomberg, will be issued in 2-layer SACD, including both stereo and 5.1 surround-sound versions. In addition, full Dolby Atmos multi-dimensional surround-sound versions will also be available for digital streaming or download via Apple Music and elsewhere. The new BMOP/sound recording features the original cast of Death and the Powers – including James Maddalena, Joélle Harvey and Patricia Risley, among others – and the Boston Modern Orchestra Project conducted by Gil Rose. Technology by the MIT Media Lab.

Tod Machover’s landmark 1987 opera VALIS (based on the semi-autobiographical novel by science fiction writer Philip K. Dick), is making its way toward a new production, the first in almost 30 years. On February 4, MIT will present a workshop performance of the new production, in anticipation of a full-scale mounting of the opera in 2023.

A new work for chamber orchestra and electronics, Cellular Symphony, is scheduled to have its world premiere at the new MIT Museum on April 22, 23 and 24, as part of the Museum’s Grand Opening celebration. The Symphony was commissioned by and will be performed by the Bath (UK) Festival Orchestra, conducted by Peter Manning.  The Orchestra will present the European premiere of the Symphony in May 2022 (date TBA).

Following the staggering success of the 2018 premiere of Tod Machover’s opera Schoenberg in Hollywood, commissioned and presented by Boston Lyric Opera, the work will see its European premiere at the Vienna Volksoper in April 2022, with Gerrit Prießnitz, Conductor. The Vienna production was originally scheduled for April 2020, just before concert halls around the world were shuttered in response to the global pandemic; it will be the first production since its Boston Lyric Opera premiere in 2018.  Cast includes Marco Di Sapia (Arnold Schoenberg); Lauren Urquhart (Girl); Jeffrey Treganza (Boy). Stage Director is Helen Malkowsky and Sophie Lux is Set and Video Designer.