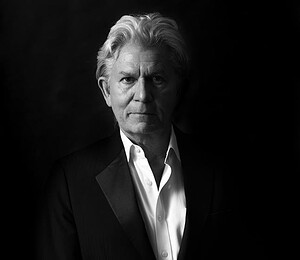 All concerts performed in Kodak Hall at Eastman Theatre in Rochester, NY
Info and Tickets: www.RPO.org

Maestro Delfs returns on October 21 & 23 to conduct Kurt Weill's Suite from The Threepenny Opera, which showcases American jazz's influence in 1920s Europe and features instrumentation that includes the banjo, bandoneon, and a trap set. The program continues with Sergei Rachmaninov's Rhapsody on a Theme of Paganini featuring pianist Natasha Paremski; Boris Blacher's Orchestral Variations on a Theme by Paganini; and Aram Khachaturian's Suite from Spartacus, one of the composer’s best-known works.

On October 7 and 9, Christoph König is guest conductor for two pieces by Saint-Saëns, "Bacchanale" from Samson and Delilah and Symphony No. 3, "Organ,” along with Lalo’s Symphonie espagnole, featuring the RPO debut of violinist Chee-Yun.

Under Delfs’ direction, the 2021-22 Philharmonics Series at Rochester’s Kodak Hall features beloved classics as well as exciting contemporary music by some of today’s leading composers, with an emphasis on bringing new and diverse perspectives and voices to the concert hall. “As we approach the orchestra’s next century,” said Delfs, “we embark on a journey that will include new and diverse voices in our music to reflect the rich cultural tapestry of our community.”

In January, guest conductor David Danzmayr conducts Icarus by Lera Auerbach, a renaissance artist recognized not only as a composer, but also a concert pianist, conductor, writer and visual artist. In March, the orchestra performs two pieces by American composers that relate to a sense of place: Leyendas: An Andean Walkabout by Gabriela Lena Frank, whose music often draws on her multicultural background, especially her mother's Peruvian heritage; and Sarah Kirkland Snider’s Something for the Dark, commissioned by the Detroit Symphony and inspired by the Detroit poet Philip Levine.

The season is also full of beloved classics such as Tchaikovsky’s Symphony No. 4; Beethoven’s Symphonies No. 1 and No. 7 and “Emperor” concerto; Schubert’s Symphony No. 8, “Unfinished”; and Mahler’s spectacular “Resurrection” symphony.

The RPO Pops Series
The 2021-22 Pops Series, under the direction of Principal Pops Conductor Jeff Tyzik (celebrating his 28th season with the orchestra), features fantastic songs and songwriting, including the music of Motown with The Kings of Soul, a concert devoted to the best of Broadway, and a 90th Birthday celebration of the great John Williams.  Several hugely anticipated programs that had to be cancelled in 20-21 have been rescheduled for 21-22: Legends: The Paul Simon Songbook (September 17 & 18, 2021) and Revolution: Music of the Beatles (April 22 & 23, 2022), both arranged by Jeff Tyzik; and the music of two of the largest movie franchises in history with Jurassic Park in Concert (January 21 & 22, 2022) and Harry Potter and the Goblet of Fire (May 27 & 28, 2022). Ringing in the holidays with the RPO has become a tradition with the ever-popular production of The Nutcracker, with the Rochester City Ballet, and the traditional Gala Holiday Pops.

About Andreas Delfs
Over the course of his 35-year career, Andreas Delfs has earned a stellar reputation as one of the most respected conductors in the orchestra world. He is widely recognized as both a successful, hands-on orchestra builder and as an imaginative and inspiring music director. His passionate and dramatic interpretations of the late romantic repertoire with orchestras in both North America and Europe have drawn critical acclaim, reflecting a constantly evolving artistic maturity marked by the insight, depth and integrity he brings to the podium.

Andreas Delfs was educated in the finest conservatories of the old and the new world and mentored by great conductors; his approach to conducting has been forged by decades of experience. At the same time, his love of new music and his commitment to discovering and exploring fresh voices have led him to establish close relationships with many of today’s composers and to conduct numerous world premiere performances. Mr. Delfs counts among his profound musical inspirations composers and musicians who span many decades, including Hans Werner Henze, György Ligeti, Philip Glass and Roberto Sierra; he has partnered with many of the world’s most renowned solo artists, including André Watts, Emanuel Ax, Joshua Bell, Hilary Hahn, Yo-Yo Ma, Lang Lang and Renée Fleming.

Andreas Delfs has held chief artistic posts with several orchestras in both North America and Europe. As Music Director (1996-2009) and Conductor Laureate (2009-2015) of the Milwaukee Symphony Orchestra, Mr. Delfs was instrumental in the orchestra’s rise to national prominence. He also led the Saint Paul Chamber Orchestra as Music Director (2001-2004) and Artistic Consultant (2004 -2006). He served as General Music Director of Hanover, Germany (1995-2000), conducting the city’s renowned symphony orchestra and opera company. Prior to his time in Hanover, Mr. Delfs was Music Director of the Bern Opera; resident conductor of the Pittsburgh Symphony during the tenure of Lorin Maazel; and Music Director, at an early age, of the Orchestre Suisse des Jeunes.

Born in Flensburg, Germany, Andreas Delfs began studying piano and music theory at age 5. He studied with Christoph von Dohnányi and Aldo Ceccato at the Hamburg Conservatory. At 20, Mr. Delfs became the youngest-ever Music Director of the Hamburg University Orchestra and Musical Assistant at the Hamburg State Opera.  He enrolled at The Juilliard School; studied with Jorge Mester, Sixten Ehrling and Leonard Bernstein; and won the Bruno Walter Memorial Scholarship.

About the RPO
The Rochester Philharmonic Orchestra (RPO) has been committed to enriching and inspiring our community through the art of music since its founding in 1922. The RPO presents approximately 150 concerts and broadcasts a year, serving up to 170,000 people through ticketed events, education and community engagement activities, and concerts in schools and community centers throughout the region. Music Director Andreas Delfs joins the ranks of former notable RPO music directors, including Erich Leinsdorf, David Zinman, Mark Elder, and Conductor Laureate Christopher Seaman. Principal Pops Conductor Jeff Tyzik, now in his 28th season, has earned a national reputation for excellence in pops programming during his tenure with the RPO. The RPO reaches more than 15,000 youth through its specific education programs.