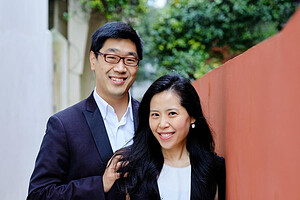 The Chamber Music Society of Lincoln Center announced today that violinist Soovin Kim and pianist Gloria Chien have been named the recipients of the 2021 CMS Award for Extraordinary Service to Chamber Music. The award is to be presented on November 9 on stage at Alice Tully Hall, after the intermission of that evening’s concert, “Chopin: Voice of the Poet,” an all-Chopin program performed by pianists Michael Brown and Anne-Marie McDermott, violinist Ani Kavafian, and cellist Nicholas Canellakis.

“Even during the deepest and darkest days of the pandemic, we knew that this award should go next to those who were working tirelessly to keep the art form thriving in the face of tremendous odds,” said David Finckel and Wu Han, co-artistic directors of CMS. “It was not long after the shutdown that we became aware of this couple’s aggressive, unstoppable and truly inspired efforts to bring great music to people in times of intense need. As the months wore on, Soovin and Gloria mounted project after project in multiple locations, from their home in Boston to their series in Chattanooga, Portland, and Vermont. As young artistic directors (and stellar performers) they have set an example not only as artists but citizens of the world, and for that, we should all be truly grateful.”

CMS musicians Gloria Chien and Soovin Kim are alumni of The Bowers Program, CMS’s development program for young artists. They epitomize the kind of leadership, expertise and passion that the program was designed to encourage, with careers as highly respected solo artists, busy chamber musicians (with CMS and independently), and artistic directors who launched their own series and are now at the helm of several different chamber music series and programs around the country.  Together, they are artistic directors of Lake Champlain Chamber Music Festival in Burlington, VT and Chamber Music Northwest in Portland, OR. Gloria is also artistic director of String Theory at the Hunter, a chamber music series at the Hunter Museum of American Art in Chattanooga TN. Throughout the pandemic, they brought chamber music to the people of Burlington, Portland and Chattanooga by producing digital concerts, featuring  both live performances and archival recordings; creating digital lecture series and educational programming; partnering with local public radio and television to extend the reach of programming; and offering many of these programs free to the public in an effort to help sustain them through the pandemic lockdown.  As soon as restrictions began to ease, in the summer of 2021, Soovin and Gloria also began reintroducing live performances, with in-person concerts, open rehearsals and master classes, family concerts, free performances and even school visits.

In the early days of the pandemic, Gloria launched Notes of Hope, daily 7:00 pm concerts that joined in the daily 7:00 pm expression of thanks for frontline healthcare workers. Notes of Hope ran for 42 days, from May 11 to June 21, with more than 65 artists and ensembles volunteering their time and talents. All the daily concerts are archived online.

“It is such a great honor to receive this award and to be in the company of such distinguished past honorees, including the founder and the former Artistic Directors of the Chamber Music Society of Lincoln Center,” said Gloria Chien and Soovin Kim. “As artistic leaders, it is our responsibility to serve our communities, especially during this time of uncertainty. Music elevates and connects, two things we urgently needed during the pandemic. We want to share this award with our organizations in Portland, Burlington and Chattanooga. We are thankful to Wu Han, David Finckel, and the Chamber Music Society of Lincoln Center for setting an example by providing invaluable support and guidance to their musicians and an abundance of rich musical offerings to their audiences!”

About the 2021 Award Recipients

Violinist Soovin Kim and pianist Gloria Chien are currently the artistic co-directors of Chamber Music Northwest in Portland, Oregon (since 2020) and the Lake Champlain Chamber Music Festival in Burlington, Vermont (since 2017); Gloria is the founder and artistic director of String Theory at the Hunter in Chattanooga, Tennessee (since 2009). They concertize worldwide as soloists and chamber artists, and first appeared at CMS through the Bowers Program. Soovin Kim serves on the violin faculty at New England Conservatory. The two musicians first met in the summer of 1999 at the Verbier Festival and became colleagues in 2013 at Music@Menlo, David Finckel and Wu Han’s festival in Silicon Valley. They married in 2015.
Gloria Chien Biography
Soovin Kim Biography

The CMS Award for Extraordinary Service to Chamber Music is presented to individuals and institutions who have shown exceptional dedication to the art form of chamber music and have significantly changed the landscape of chamber music through their passionate commitment and exceptional vision. Recipients, chosen by CMS’s artistic department, can be artists, presenters or others who have shown an exceptional commitment to chamber music. This year, CMS felt strongly that the award should recognize contributions made specifically in response to the COVID-19 pandemic. The inaugural CMS Award for Extraordinary Service to Chamber Music went to pianist Menahem Pressler in 2013 and the following year to CMS founding director Charles Wadsworth. Other prior recipients include Marlboro Music (2015), South Mountain Concerts (2016), Chamber Music Connection (2018) and David Shifrin (2019).

About the Chamber Music Society of Lincoln Center (CMS)

The Chamber Music Society of Lincoln Center (CMS) is one of eleven constituents of the largest performing arts complex in the world, Lincoln Center for the Performing Arts, which includes the New York Philharmonic, New York City Ballet, Lincoln Center Theater, and The Metropolitan Opera. With its home in Lincoln Center's Alice Tully Hall, CMS is known for the extraordinary quality of its performances and its programming, and for setting the benchmark for chamber music worldwide. Through its many performance, education, recording, and broadcast activities, it brings the experience of great chamber music to more people than any other organization of its kind. Under the artistic leadership of David Finckel and Wu Han, CMS presents a wide variety of concert series and educational events for listeners of all ages, appealing to both connoisseurs and newcomers. CMS performing artists constitute a revolving multi-generational and international roster of the world’s finest chamber musicians, enabling CMS to present chamber music of every instrumentation, style, and historical period. Annual activities include a full season in New York, as well as national and international tours.