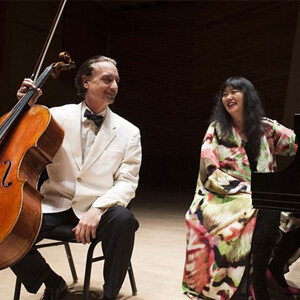 “We are honored to receive CMS’s vote of confidence to continue leading the organization on the path we have forged,” said David Finckel and Wu Han. “CMS’s responsibility to serve the art of chamber music at Lincoln Center constitutes a strong, clear mission which guides our work in all aspects. We pledge to remain true to that mission, and to deliver programming and performances of the highest artistic excellence.”

CMS Executive Director Suzanne Davidson said, “David and Wu Han have been a powerful engine since they joined us in 2004. During their tenure, they expanded our Bowers program for young artists and greatly expanded the stellar, international roster of musicians on our stages, both in New York and beyond.  They created new opportunities to tour nationally and internationally, at prestigious venues around the country -- including Chicago’s Harris Theater, Wolf Trap, the Saratoga Performing Arts Center, the St. Cecilia Music Center in Grand Rapids, Michigan, and the Society of the Four Arts in Palm Beach -- to major cities across four continents. Since the pandemic began, our indefatigable artistic directors created nearly 200 digital programs that included concert footage from our archives as well as newly created programming that has reached a global audience. And as soon as it was feasible to gather outdoors, they produced a free outdoor summer concert series in Damrosch Park. We can’t wait to see what they have in store for us over the next five years.”

Chair of the CMS Board of Directors Elinor Hoover said, “We are delighted that David and Wu Han will continue their tenure at CMS for another five years. Their artistic vision for CMS has nurtured our souls and brought solace to many during the pandemic. Their tireless energy, singular insight, and ambitious leadership have made CMS the global institution it is today, and we’re confident they will bring CMS to even greater heights.”

About David Finckel
Co-artistic director of CMS since 2004, cellist David Finckel leads a dynamic musical career that has included performances on the world’s most distinguished stages as well as ground-breaking entrepreneurial projects. As cellist of the Emerson String Quartet for 34 seasons, he leaves a legacy of performed and recorded chamber music that includes virtually the complete string quartets of Mozart, Beethoven, Schubert, Schumann, Mendelssohn, Dvorák, Brahms, Bartók, and Shostakovich, as well as the additional collaborative masterpieces and discoveries that he performs annually. His solo and duo discography is equally comprehensive, including all the standard literature for cello and piano. Fascinated since student days by recording technology, he created ArtistLed with pianist Wu Han in 1997, the first internet-based classical label to allow artists complete control over repertoire, sound engineering, editing, packaging, and presentation. His discography includes works composed for him by George Tsontakis, Gabriela Lena Frank, Bruce Adolphe, Lera Auerbach, Augusta Read Thomas, and Pierre Jalbert, and his orchestral recordings include both the Dvorák and Harbison Concertos. His commitment to living luthiers is evidenced through his performances, since 1993, on a cello made for him by the Brooklyn maker Samuel Zygmuntowicz, a copy of the “Duport” Stradivari cello of 1711. At age ten, deeply inspired by the Russian cellist Mstislav Rostropovich, he committed himself to life as a cellist, and at age 16 became Rostropovich’s first American student. After first playing with pianist Wu Han in 1981, he added to his already busy career the responsibilities and opportunities of a professional cello-and-piano duo, both in the recording studio and on the concert stage. Finckel co-directs CMS’s Bowers Program, and as founder and artistic director of Music@Menlo, the festival’s annual Chamber Music Institute. He teaches cello and chamber music at both the Juilliard School and Stony Brook University.

About Wu Han
Pianist Wu Han, recipient of Musical America’s Musician of the Year Award, the highest honor bestowed by the organization, enjoys a multi-faceted musical life that encompasses performing, recording, and artistic direction at the highest levels. Currently co-artistic director of the Chamber Music Society and Music@Menlo, Silicon Valley’s innovative chamber music festival, she also serves as artistic advisor for Wolf Trap’s Chamber Music in the Barns series and for Palm Beach’s Society of the Four Arts. Her recent concert activities have taken her from New York’s Lincoln Center stages to the most important concert halls in the United States, Europe, and Asia. In addition to countless performances of virtually the entire chamber repertoire, her recent concerto performances include appearances with the Philadelphia Orchestra, the Atlanta Symphony, and the Aspen Festival Orchestra. She is the founder and artistic director of ArtistLed, classical music’s first artist-directed, internet-based recording label (1997) which has released her performances of the staples of the cello-piano duo repertoire with cellist David Finckel. Her more than 80 releases on ArtistLed, CMS Live and Music@Menlo Live include masterworks of the chamber repertoire with numerous distinguished musicians, the latest being Schubert’s Winterreise with baritone Nikolay Borchev. During the past season, Wu Han designed and produced more than 200 digital media projects, including concerts and innovative educational programs, which have sustained the art of chamber music in dozens of communities across the United States. At CMS, she was instrumental in transforming the CMS Two Program into today’s Bowers Program, which admits, through rigorous and highly competitive auditions, stellar young musicians to the CMS roster for a term of three seasons. Passionately dedicated to education for musicians of all ages and experience, she directs the Chamber Music Institute at Music@Menlo, which immerses some 40 young musicians every summer in the multi-faceted fabric of the festival. Wu Han was privileged to serve on multiple occasions as a faculty member of Isaac Stern’s Chamber Music Encounters in Israel, New York, and Japan. A recipient of the prestigious Andrew Wolf Award, she was mentored by an elite selection of some of the greatest pianists of our time, including Lilian Kallir, Rudolf Serkin, and Menahem Pressler. Married to cellist David Finckel since 1985, Wu Han divides her time between concert touring and residences in New York City and Westchester County.

About the Chamber Music Society of Lincoln Center (CMS)
The Chamber Music Society of Lincoln Center (CMS) is one of eleven constituents of the largest performing arts complex in the world, Lincoln Center for the Performing Arts. Through its many performance, education, recording, digital, and broadcast activities, CMS brings the experience of great chamber music to more people than any other organization of its kind with a full season in New York, as well as national and international tours. Under the artistic leadership of David Finckel and Wu Han, CMS presents a wide variety of concert series and educational events for listeners of all ages, appealing to both connoisseurs and newcomers. The performing artists constitute a revolving multi-generational and international roster of the world’s finest chamber musicians, enabling CMS to present chamber music of every instrumentation, style, and historical period. The CMS Bowers Program, its competitive three-season residency, is dedicated to developing the chamber music leaders of the future and integrates this selection of extraordinary early-career musicians into every facet of CMS activities. Its incomparable digital presence, which regularly enables CMS to reach hundreds of thousands of listeners around the globe annually, includes: a growing number of live-streamed programs; more than 750 hours of performance and education videos free to the public on its website; a 52-week public radio series across the US; radio programming in Taiwan and mainland China; appearances on American Public Media; the monthly program “In Concert with CMS” on the ALL ARTS broadcast channel; the NY-Emmy-nominated documentary film “Transcending: The Chamber Music Society of Lincoln Center Celebrates 50 Years;” and performances featured on Medici.tv, Tencent, and SiriusXM’s Symphony Hall channel.