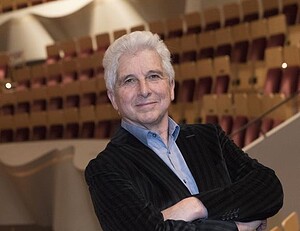 The Colorado Symphony Association (CSA) is delighted to announce the appointment of Peter Oundjian as Principal Conductor. A dynamic presence in the conducting world, Oundjian is renowned across the globe for his vibrant collaborative spirit and engaging musicality. In addition to his work on the podium, where he will conduct six Classics performances each season, Oundjian will take a leading role in the artistic planning for the CSA, reimagining the traditional symphonic model and positioning the Colorado Symphony as a preeminent 21st-century orchestra.

“I am thrilled to be joining the Colorado Symphony as Principal Conductor,” said Oundjian, “as I have always enjoyed working with this extraordinary orchestra. The level of musicianship and dedication among the players, and the organization’s willingness to experiment, collaborate and push the boundaries of what an American orchestra can be, makes this a very exciting partnership."

With a career spanning five decades, Oundjian began as a solo violinist, and first violinist of the Tokyo String Quartet, followed by an international conducting career leading orchestras in virtually every major musical center in the world. After a 14-year tenure as the Music Director of the Toronto Symphony Orchestra, and 6 years at the helm of the Royal Scottish National Orchestra, Oundjian was named Music Director of the Colorado Music Festival in 2019 and continues in that role.

Colorado Symphony audiences are well acquainted with Oundjian, who served as the orchestra’s Principal Guest Conductor from 2003 to 2006 and has been a frequent collaborator. Concertgoers will have three opportunities to see Oundjian on the podium through the end of the current concert season as he will conduct Holst’s The Planets March 25-27, Mahler’s “Resurrection” Symphony on April 16, and the Colorado Symphony’s season finale of Beethoven’s Ninth Symphony from May 27-29.

“The appointment of Peter Oundjian as our Principal Conductor is a transformational moment for our orchestra and our organization,” said Anthony Pierce, Chief Artistic Officer. “The Colorado Symphony is reimagining the possibilities for live symphonic music, and Peter will play an integral part in that process moving forward. Peter is a conductor and leader of the highest caliber, and we are thrilled to welcome him to Denver.”

Recognized as a masterful and dynamic presence in the conducting world, Oundjian has developed a multi-faceted portfolio as a conductor, violinist, professor, and artistic advisor. He has been celebrated for his musicality, collaborative spirit, innovative programming, commitment to mentoring young musicians and an engaging personality that instantly puts musicians, students, and audiences at ease.

Now carrying the title of Conductor Emeritus, Oundjian’s fourteen-year tenure as Music Director of the Toronto Symphony served as a major creative force for the city of Toronto and was marked by a reimagining of the TSO’s programming, international stature, audience development and touring as well as a number of outstanding recordings; TSO garnered a Grammy nomination in 2018 and a Juno award for Vaughan Williams’ Orchestral Works in 2019. He led the orchestra on several international tours to Europe and the USA, conducting the first performance by a North American orchestra at Reykjavik’s Harpa Hall in 2014.

"On behalf of the Colorado Symphony Board of Trustees, we're delighted to welcome Peter Oundjian as our new Principal Conductor. We look forward to the experience and enthusiasm he'll bring to the CSA as we imagine a bright future for live symphonic music in Colorado," said Board Co-Chairs Richard Krugman and Julie Rubsam.

From 2012-2018, Oundjian served as Music Director of the Royal Scottish National Orchestra during which time he implemented the kind of collaborative programming that has become a staple of his directorship. Oundjian led the RSNO on several international tours, including North America, China, and a European festival tour with performances at the Bregenz Festival, the Dresden Festival as well as in Innsbruck, Bergamo, Ljubljana, and others. His final appearance with the orchestra as their Music Director was at the 2018 BBC Proms where he conducted Britten’s epic War Requiem. In 2019, Oundjian presented his first in-person season as Music Director of the Colorado Music Festival in Boulder, where he has already garnered critical acclaim and attention for innovative programming and for commissioning new works, putting the Festival on the map of summer classical-music festivals.

Oundjian has been a visiting professor at Yale University’s School of Music since 1981, and in 2013 was awarded the school’s Sanford Medal for Distinguished Service to Music. A dedicated educator, Oundjian conducted the Yale and Juilliard Symphony Orchestras and the New World Symphony during the 2018/19 season.

An outstanding violinist, Oundjian spent fourteen years as the first violinist of the renowned Tokyo String Quartet before he turned his energy towards conducting.

ABOUT THE COLORADO SYMPHONY
The Colorado Symphony Association is the region's only full-time professional orchestra committed to artistic excellence and ensuring the future of live, symphonic music. Performing over 150 concerts annually at Boettcher Concert Hall in downtown Denver and across Colorado, your Colorado Symphony is home to eighty full-time musicians, representing more than a dozen nations, and regularly welcomes the most celebrated artists from all genres of music.  During the COVID-19 health pandemic, we worked to safely produce over 50 concerts with and without audiences, including: 18 Red Rocks Park and Amphitheatre performances, two large scale virtual community benefit concerts, and dozens of small ensemble concerts performed in numerous outdoor venues like the Denver Performing Arts Complex Galleria, Denver Zoo, and Denver Botanic Gardens. Virtual #PlayOn campaigns garnered 2 million views between our Virtual Music Hour, Weekly Replay, From Home Concerts, and MusiCurious Instrument Interviews. Recognized as an incubator of innovation, creativity, and excellence, your Colorado Symphony continually expands its impact through education, outreach, and programming. We partner with the state’s leading musical artists, cultural organizations, corporations, foundations, sports teams, and individuals to expose diverse audiences to the power of symphonic orchestral music.