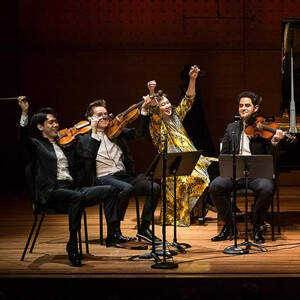 New York, NY: , March 17, 2022 — In March 2020, when the world shut down, the Chamber Music Society of Lincoln Center closed its doors. Now, a new two-part PBS film, CHAMBER MUSIC SOCIETY RETURNS, tells the story of CMS’s return to live concerts at Lincoln Center’s Alice Tully Hall and on a six-city national tour. The documentary captures the passion for making music that pushed the CMS community forward at every turn. The film features behind-the-scenes footage in CMS’s rehearsal studios, backstage, and offices; musicians revealing their relief at finally leaving the isolation of the pandemic behind; and the jubilant performances that represented the long-awaited return to the stage, full of emotion, embraces, and tears of joy.

Even in the early days of the pandemic, when live concerts were impossible, CMS found ways to keep audiences and musicians connected and provide the desperately needed comfort that music can provide in times of crisis and loss. David Finckel and Wu Han, CMS artistic directors, created more than 180 digital programs during the lockdown, and CMS led the way for chamber music organizations around the country, providing digital concerts for them to share with their communities. Throughout the lockdown, CMS and its artists yearned to be back at Lincoln Center with live audiences, and when in-person concerts once again became possible, they were ready to take on the unprecedented logistical challenges that awaited them. 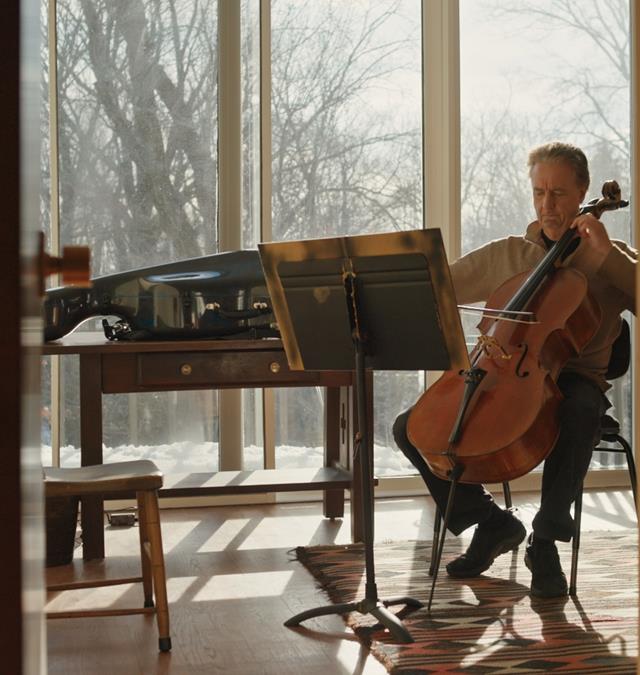 At the start of the film, David Finckel explains succinctly why live music is special. “Listening to a recording,” he says, “is like looking at a painting on a wall. It can be a great painting, but it doesn’t change. It’s always exactly the same. The live performance, though, is so far beyond the recording or the painting on the wall in that it’s like watching the artwork itself being recreated by the artist in front of your eyes in real time. Because live is always an interpretation. It’s never the same twice.” 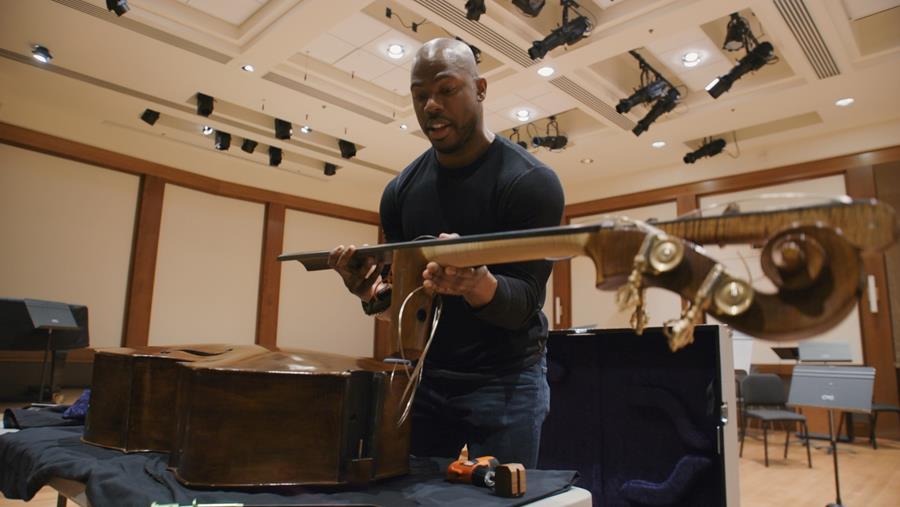 This is where Part 1 of the documentary, “Setting the Stage,” begins. After a year and a half away from a darkened stage, the CMS community bands together to prepare for its first opening night since the onset of the COVID-19 pandemic, facing a host of new processes and protocols, with uncertainties around every corner. Violinist Arnaud Sussmann, bassist Joseph Conyers, cellist David Finckel, and pianist Wu Han talk about the frightful and solitary early stages of the pandemic, the solace that music brought them during that time, and their renewed appreciation for playing with each other and in front of live audiences. Viewers get to see the everyday work of chamber musicians: ensembles rehearsing and conferring on tempi and tone, and Joseph Conyers taking apart his giant double bass and packing the great instrument, custom built for him, into its rectangular steel travel case. As opening night approaches, the anticipation is palpable.

Punctuating this first hour of the documentary are performances of both solo Bach and works from the opening night concert, including the meditative and noble second movement, Adagio con espressione, from Beethoven’s C minor String Trio, Op. 9, No. 1; the intimate yet playful Rondo in A major by Schubert; and the exuberantly virtuosic finale, Allegro vivace, from Mendelssohn’s D major Sextet. 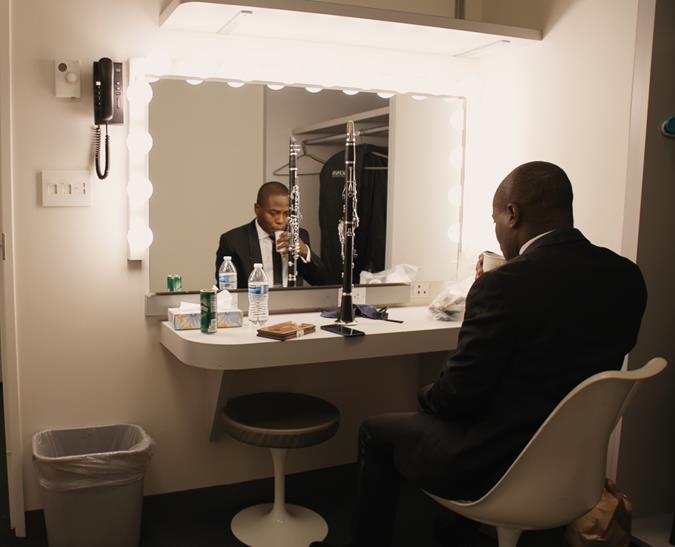 Part 2, “Bringing Down the House,” leaves the glow of opening night behind and lets us see the CMS community getting back to the work of presenting a season of concerts in this new landscape. Among the challenges is finding a way to safely gather over a dozen wind players for whom performing was considered risky earlier in the pandemic (due to the possibility of their breath helping to spread COVID-19). Hearing clarinetist Anthony McGill reflect on the particular challenge of COVID-19 for wind players – and the particular danger this disease posed for the lungs – we understand even more the artists’ renewed appreciation for the ability to play music as a community once more.

As December approaches, CMS prepares for the 28th year of its eagerly anticipated holiday tradition, which did not take place in December 2020: presenting all of Bach’s Brandenburg Concertos to welcome in the holidays, first on tour and culminating in performances at Alice Tully Hall. Twenty musicians travel to six cities over ten days, running into a host of setbacks, from inclement weather and travel delays to cataclysmic malfunctions. Cellist Dmitri Atapine, flutist Tara Helen O’Connor, and violinist Arnaud Sussman recall their travails as the ensemble made its way from Chicago, IL to Reno, NV to Costa Mesa, CA to Davis, CA to Palm Beach, FL to Princeton, NJ. But nothing can keep the intrepid musicians from finding a way to perform Bach’s glorious music for the gathered audiences, who offer thunderous applause and standing ovations in return. As the tour comes to a triumphant close, the resilient artists return home to New York City to perform the Brandenburg Concertos at Lincoln Center’s Alice Tully Hall for their local community, even as the growing Omicron variant raises new questions about what the future brings.

“Bringing Down the House” is anchored by Mozart’s enduring “Gran Partita”, K. 361 as well as Bach’s Brandenburg Concertos No. 3 and 4. 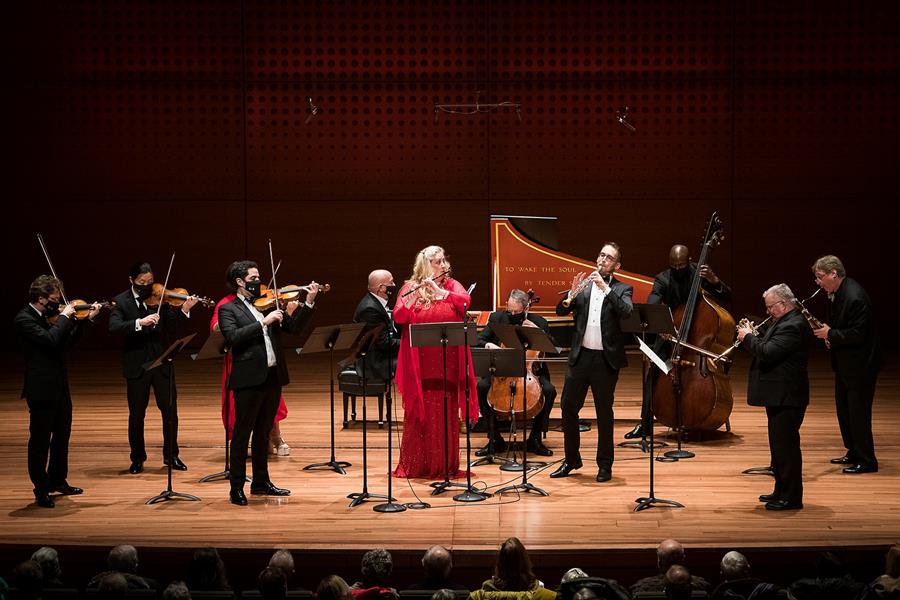 About the Chamber Music Society of Lincoln Center (CMS)

The Chamber Music Society of Lincoln Center (CMS) is one of eleven constituents of the largest performing arts complex in the world, Lincoln Center for the Performing Arts. Through its many performance, education, recording, digital, and broadcast activities, CMS brings the experience of great chamber music to more people than any other organization of its kind with a full season in New York, as well as national and international tours. Under the artistic leadership of David Finckel and Wu Han, CMS presents a wide variety of concert series and educational events for listeners of all ages, appealing to both connoisseurs and newcomers. The performing artists constitute a revolving multi-generational and international roster of the world’s best chamber musicians, enabling CMS to present chamber music of every instrumentation, style, and historical period. The CMS Bowers Program, its competitive three-season residency, is dedicated to developing the chamber music leaders of the future and integrates this selection of extraordinary early-career musicians into every facet of CMS activities. Its incomparable digital presence, which regularly enables CMS to reach hundreds of thousands of viewers and listeners around the globe annually, includes: a growing number of live-streamed programs; more than 1,000 hours of performance and education videos free to the public on its website; a 52-week public radio series across the US; radio programming in Taiwan and mainland China; appearances on American Public Media; the monthly program “In Concert with CMS” on the ALL ARTS broadcast channel;  the NY-Emmy-nominated documentary “Transcending: The Chamber Music Society of Lincoln Center Celebrates 50 Years;” and performances featured on Medici.tv, Tencent, and SiriusXM’s Symphony Hall channel.

PBS, with more than 330 member stations, offers all Americans the opportunity to explore new ideas and new worlds through television and digital content. Each month, PBS reaches over 120 million people through television and 26 million people online, inviting them to experience the worlds of science, history, nature and public affairs; to hear diverse viewpoints; and to take front row seats to world-class drama and performances. PBS’ broad array of programs has been consistently honored by the industry’s most coveted award competitions. Teachers of children from pre-K through 12th grade turn to PBS for digital content and services that help bring classroom lessons to life. Decades of research confirms that PBS’ premier children’s media service, PBS KIDS, helps children build critical literacy, math and social-emotional skills, enabling them to find success in school and life. Delivered through member stations, PBS KIDS offers high-quality educational content on TV – including a 24/7 channel, online at pbskids.org, via an array of mobile apps and in communities across America. More information about PBS is available at www.pbs.org, one of the leading dot-org websites on the internet, or by following PBS on Twitter, Facebook or through our apps for mobile and connected devices. Specific program information and updates for press are available at pbs.org/pressroom or by following PBS Communications on Twitter.