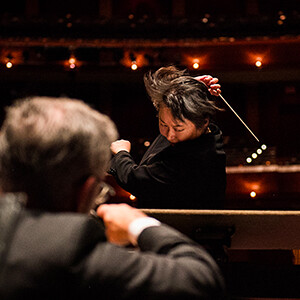 President & CEO Gabriel van Aalst says: “Xian’s transformative artistic leadership over the past six years has led us to this milestone centennial, and we are so proud to announce that she will continue to lead the Symphony through our 2027–28 season.”

Zhang says: “The centennial season will be a great celebration at a much higher magnitude than anything our audience has previously experienced in our concerts. We will honor our traditions, but at the same time, do new pieces that excite our audience and our orchestra. This season, we’re featuring outstanding artists from all backgrounds, an amazing variety of music and spectacular performances that bring in visuals, film and dance. There will also be wonderful opportunities for our orchestra musicians to show off how brilliant they are.”

The subscription season opens with Yefim Bronfman performing Rachmaninoff’s Third Piano Concerto with Zhang at the podium. The Symphony performs the complete ballet score of Copland’s Appalachian Spring; dancers from Nimbus Dance add original choreography to two of the weekend’s performances. The program opens with a new co-commission from Jessie Montgomery.

Zhang and the Symphony close the season with Stravinsky’s The Rite of Spring. Joshua Bell plays Bruch’s First Violin Concerto on the program, which opens with the world premiere of a new commission from Daniel Bernard Roumain.

After serving as the Symphony’s artist-in-residence for the 2021–22 season, Daniil Trifonov returns for Brahms’ Second Piano Concerto. Other returning guest stars include Hilary Hahn, who performs Sibelius’ Violin Concerto; Michelle Cann, who performs Strauss’ Burleske for Piano and Orchestra, and George Li, who performs Rachmaninoff’s Rhapsody on a Theme of Paganini.

Other world premieres include commissions from Chen Yi and Darryl Kubian. The new work from Kubian, who is also a New Jersey Symphony violinist, is a triple concerto for horn, trumpet and cello that will feature his Symphony colleagues—Principal Horn Chris Komer, Principal Trumpet Garth Greenup and Assistant Principal Cello Nayoung Baek.

Continuing a New Jersey Symphony tradition, the orchestra hosts a festive Lunar New Year Celebration in Newark to ring in the Year of the Rabbit. Another tradition returns—Zhang conducts Handel’s Messiah with the Symphony’s longtime choral partners from Montclair State University and a quartet of vocal soloists at Richardson Auditorium in Princeton and the Cathedral Basilica of the Sacred Heart in Newark.

The Symphony performs blockbuster films with Oscar-winning John Williams scores live to picture—Star Wars: The Empire Strikes Back and Jaws. The orchestra also presents a “Best of John Williams” concert featuring iconic themes from the composer’s most legendary film scores.

The Symphony presents a pair of family programs at the Victoria Theater at NJPAC. “A Joyful Noise!” spotlights celebrated artists from Newark and beyond in a gospel music-inspired holiday concert. “Hooray for Bollywood!” features signature music from the Indian Hindi-language film industry.

The New Jersey Symphony Youth Orchestra gives qualified middle- and high-school students—especially Black and Latinx youth in the Greater Newark area—unparalleled opportunities to achieve personal and musical excellence. In the 2021–22 season, the program expanded to a hybrid in-person/virtual design, introducing new dimensions to the program, from composition and rhythm courses to an eclectic array of electives. In 2020–21, nearly 200 students collaborated on a yearlong creative composition project—a uniquely engaging opportunity to explore their own musical voices and shape new works drawing from all the genres that inspire them.

The Symphony introduces “Celebrate 100” a new free-ticket community program for residents of Newark, guaranteeing 100 tickets for each of its classical concerts at NJPAC.

Class Pass returns for college students looking for season-long tickets. The $25 membership allows for the member and another student guest to attend most concerts at no additional cost. Additional student ticket opportunities for single concerts will be available.

The Symphony continues to offer reduced admission to its concerts for active military, veterans, first responders and employees of corporate sponsors.

Zhang says: “This season highlights the talents within our orchestra and New Jersey. It will be very meaningful to present new works by Daniel Bernard Roumain, Steven Mackey, Jessie Montgomery, Wynton Marsalis, Chen Yi and our own Darryl Kubian—fantastic composers whose works will surely delight our audiences. Over our 100-year history, this orchestra has been shaped by wonderful conductors, and I am so happy to welcome some of my predecessor New Jersey Symphony music directors to the podium during the centennial season. This season is full of works that showcase our incredible Symphony musicians. I am so looking forward to welcoming dancers from Nimbus Dance and New Jersey Ballet and singers from Montclair State University and Princeton University to our stages this season.”

Van Aalst says: “Our centennial programming highlights how we continue to expand our commitment to representing our state in all its diversity. We’re thrilled to be showcasing many exciting collaborations this season, which provides an extra sense of poetry. We’re especially focused on dance, and on interdisciplinary performances that subtly add new dimensions to our performances and demonstrate the ways that classical music intertwines with different aspects of our lives, what it does for us, and how it uplifts us and connects us to the world. I’m thrilled that we will partner with the Geraldine R. Dodge Poetry Festival to bring poets to the stage as well.”

To help support this momentous season and to create a foundation that advances the Symphony’s commitments to access, diversity and excellence well into its next 100 years, the institution is launching the Centennial Fund. This fund will offer donors the opportunity to increase their giving with a special one-time gift to commemorate this special occasion, as well as support the Symphony’s mission for years to come.

Joshua Bell will serve as the honorary chair of the New Jersey Symphony’s 2022–23 Annual Fund and will also serve as a member of the Symphony’s Centennial Committee.

New Jersey Symphony Board Co-Chair Ann Borowiec says: “This is an incredibly exciting time for the Symphony. The artistic excellence of Xian and our musicians is at an all-time level and we are making meaningful inroads to secure our future, attracting new audiences and continuing to advance our efforts around diversity equity and inclusion. The Centennial Fund is the perfect complement to our Annual Fund to generate the resources needed to meet our mission goals and propel us long into the future.”

The world premiere by Steven Mackey is sponsored by Linda K. and William T. Walker.

Classical subscriptions are now on sale for the 2022–23 season. Full information on ticket packages for each series and venue is available at njsymphony.org/subscribe. Subscriptions are available for purchase online or by phone at 1.800.ALLEGRO (255.3476). Single tickets will go on sale in August.