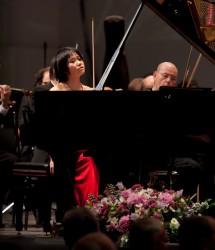 After the enthusiastic and heartfelt reception the Israel Philharmonic received at the 2012 Salzburg Festival in July (and at the urging of devoted friends and fans of the IPO), the Orchestra has opted to bring Arnold Schoenberg's Kol Nidre and Israeli composer Noam Sheriff's Mechaye Hametim (Revival of the Dead)—two works performed in Salzburg—to New York City for the Carnegie Hall gala on October 25 along with Grammy Award-winning baritone Thomas Hampson and The Collegiate Chorale. The Salzburg performance of these works on July 24 prompted The New York Times to state, "Abetted by Mr. Hampson's tour de force, in which he also served as narrator in the Schoenberg and spoke and sang in the Sheriff, the evening's performances were everywhere excellent...The concert was greeted warmly, even clamorously..." The concert at Carnegie Hall also features Yuja Wang performing Mendelssohn's Piano Concerto No. 1 in G minor. This performance marks the New York premiere of Sheriff's Mechaye Hametim.

The concerts in Palm Desert (October 28), Las Vegas (October 29) and Los Angeles (October 30) all feature Schubert's Symphony No. 3 in D major, Chopin's Piano Concerto No. 1 in E minor (with Yuja Wang) and Brahms's Symphony No. 1 in C minor (for the complete schedule, click here.) The Israel Philharmonic Orchestra acts as Cultural Ambassador for the State of Israel during this tour to the United States.

Maestro Zubin Mehta, one of the world's great conductors, continues his role as a leader and friend of the IPO and the State of Israel. In addition to his title as Music Director for Life of the IPO, Mehta has held the post of Music Director for the Montreal Symphony, Los Angeles Philharmonic, Bavarian State Opera and New York Philharmonic—for which, at 13 years, he remains the organization’s longest-serving Music Director, conducting over one thousand concerts. He was also made an Honorary Member of the New York Philharmonic, an homage formerly bestowed on Wagner, Liszt, Dvorák, Copland and Bernstein, among others.

Zubin Mehta has maintained a strong commitment to exposing today’s youth to classical music. He founded the Mehli Mehta Music Foundation in his birthplace of Mumbai, where more than 300 children annually find access to Western Classical Music. The Buchmann-Mehta School of Music in Tel Aviv educates young talents in Israel and is closely related to the Israel Philharmonic Orchestra, as is a project of teaching young Arab-Israelis in the cities of Shwaram and Nazareth, in conjunction with local teachers and members of the Israel Philharmonic Orchestra.

Maestro Mehta has conducted over two thousand concerts as Music Director of the Israel Philharmonic Orchestra, including multiple tours spanning five continents. In 2006, Zubin Mehta was recognized for his extraordinary artistic achievements as a Kennedy Center Honoree. In 2011, he received a star on the Hollywood Walk of Fame and became a recipient of the Furtwängler Prize at Bonn's prestigious Beethovenfest for his "dedication both to music and social issues." Recently, Maestro Mehta conducted the NHK Symphony Orchestra in a benefit concert for the victims and survivors of the 2011 Japan earthquake and tsunami disaster.

About Yuja Wang
Born in Beijing in 1987, Yuja began studying piano at age six, with her earliest public performances taking place in China, Australia and Germany, and went on to study at the Central Conservatory of Music in Beijing under Ling Yuan and Zhou Guangren. For the following three years, from 1999 to 2001, Yuja moved to Canada and began studying with Hung Kuan Chen and Tema Blackstone at the Morningside Music summer program at Calgary’s Mount Royal College Conservatory, an artistic and cultural exchange program between Canada and China. In 2002, when Yuja was 15, she won Aspen Music Festival’s concerto competition and moved to the U.S. to study with Gary Graffman at The Curtis Institute of Music in Philadelphia, where she graduated in 2008. In 2006 Yuja received the Gilmore Young Artist Award. In 2010 she was awarded the prestigious Avery Fisher Career Grant. Yuja is a Steinway Artist.

About Thomas Hampson
Hailing from Spokane, Washington, Hampson has received many honors and awards for his probing artistry and cultural leadership. His discography of more than 150 albums includes winners of one Grammy Award, five Edison Prizes, the Grand Prix du Disque, and most recently the 2011 “Singer of the Year” ECHO Prize. Having previously received an Opera News Award, Hampson was honored by the Metropolitan Opera Guild with its rarified Met Mastersingers event in 2012, and in 2011 he received the famed Concertgebouw Prize. In 2010 he was elected a member of the American Academy of Arts and Sciences, and he was distinguished with the Living Legend Award by the Library of Congress, where he serves as Special Advisor to the Study and Performance of Music in America. He received the 2009 Distinguished Artistic Leadership Award from the Atlantic Council in Washington, DC, and was appointed the New York Philharmonic’s first Artist in Residence. Hampson holds honorary doctorates from Manhattan School of Music, Whitworth College, and the San Francisco Conservatory, and is an honorary member of London’s Royal Academy of Music. He carries the title of Kammersänger of the Vienna State Opera, was named a Commandeur dans l’Ordre des Arts et des Lettres by the Republic of France, and was awarded the Austrian Medal of Honor in Arts and Sciences.

About Noam Sheriff
Noam Sheriff, one of Israel’s most versatile and world renowned musicians, was born in Tel Aviv in 1935. He studied composition and conducting in Tel Aviv (Paul Ben-Chaim), Berlin (Boris Blacher) and Salzburg (Igor Markevitch) and philosophy at the Hebrew University, Jerusalem. Since the 1957 premiere of his work Festival Prelude by the Israel Philharmonic Orchestra under Leonard Bernstein at the opening of the Mann Auditorium in Tel Aviv, his works have been regularly performed in Israel and all over the world. Between 1989 and 1995, he was the Music Director of the Israel Symphony Orchestra Rishon Le-Zion which, under his leadership, achieved success unprecedented in Israeli musical history. He has taught at such institutes as the Jerusalem and Tel Aviv Universities as well as the Musikhochschule in Cologne and the Mozarteum in Salzburg. Since 1990, Noam Sheriff has been professor of composition and conducting at the Tel Aviv University's Rubin Academy of Music and, in the years 1998-2000, its Director. In April 2004, he was nominated Music Director of the New Haifa Symphony Orchestra. Noam Sheriff was the winner of the “Acum” prize, and in 2003, the prestigious EMET PRIZE, the highest prize awarded in Israel for excellence in culture and the sciences. He was recently nominated as one of the 50 most influential figures in Israeli music.