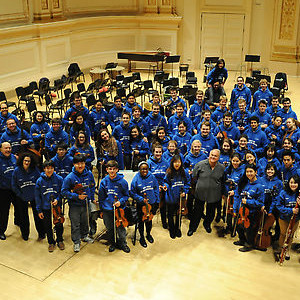 Established in 1969 by prominent New York arts administrator and artist manager, Frank Salomon, the New York String Orchestra Seminar, under the auspices of The New School’s Mannes School of Music, will celebrate its 50th year as one of the most important conservatory-level training programs in the world in December 2018.  Created for the legendary musician, Alexander “Sasha” Schneider, the New York String Orchestra Seminar has been a launching point for countless young musicians as they bridge the gap between their student years and the very early stages of their careers, with over 2,300 notable alumni actively performing extensively as soloists and in nearly every major orchestra and chamber ensemble in the United States.

The highly demanding program is offered to only 66 students, ages 16-23, from an applicant pool of more than 400.  Each accepted student receives a full scholarship for the 10-day program, including room and board, as has been the custom since the Seminar’s inception.  Over the span of the 10-day Seminar, the musicians participate in orchestra rehearsals, chamber music sessions, and sectional coachings between six and ten hours daily. The Seminar maintains its long tradition of performing on the Stern Auditorium Stage in Carnegie Hall on two occasions, Christmas Eve and December 28, 2018; this year acclaimed guest artists Yefim Bronfman and Joshua Bell will join the Seminar participants as well as a number of celebrated alumni, including Cho-Liang Lin, Kyoko Takezawa, Bella Hristova, Jinjoo Cho.  In 1993, shortly before his death Schneider appointed acclaimed conductor Jaime Laredo as the New York String Orchestra Seminar Music Director, as position Laredo continues to uphold as he introduces each year’s students to an ideology that the effectiveness of music, beyond technical mastery, requires personal expressivity, emotional warmth and generosity, joy, and gratitude.  "It was one of the defining moments for me as a teenager. The passion of people your own age is very important; it puts you in touch with a larger world, beyond schooling and everything else you do." — Yo-Yo Ma, cellist, participant in the 1971 New York String Orchestra Seminar

MENDELSSOHN: The Hebrides Overture
VIVALDI: Concerto for Four Violins and Orchestra in B Minor, Op. 3 No. 10
BEETHOVEN: Piano Concerto No. 4

“’We wanted the seminar to be a total experience – living, eating, breathing together, not like going to school.’  Mr. Salomon said…This is the kind of situation that Mr. Schneider, a Johnny Appleseed of good music, likes best.  ‘The moment there is no overprofessionalism, there is immediate enthusiasm.  I wish I could do this all the time.’” – The New York Times, December 25, 1969