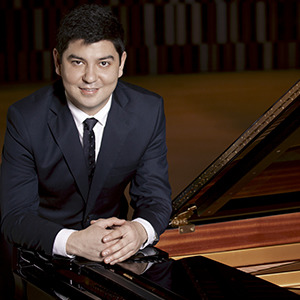 Following the enormous success of his Carnegie Hall recital debut in 2016, the 29-year-old Uzbek pianist Behzod Abduraimov  returns to Carnegie Hall’s Stern Auditorium/Perelman Stage on two occasions in Fall 2019. On October 25, Mr. Abduraimov joins the storied Munich Philharmonic, under the direction of Valery Gergiev, as the soloist in the vibrant Tchaikovsky Piano Concerto No. 1, which he also performs with the Philharmonic on October 27 at the New Jersey Performing Arts Center; he returns to Carnegie Hall on December 10 with a solo program displaying his enormous range, musical intelligence, and virtuosity which have earned him the international reputation as “the most perfectly accomplished pianist of his generation,” (The Independent).

The impressive musician has quickly established himself within not only the current generation’s outstanding pianists, but among the classical music giants. After making his Carnegie recital debut in November 2016, Mr. Abduraimov was praised by The New York Times: “Yes, he dispatched ‘Islamey’ faster than anyone I’ve heard, his forearms a hummingbird blur in the grueling passagework. But his swift rise on the concert scene — this appearance on the main Stern Auditorium stage here came less than two years after his recital debut at the intimate Weill Recital Hall — is due as much to his profound musicality as to his power and speed.” Mr. Abduraimov’s explosive stage presence, impeccable pianistic technique, and fiery interpretations of orchestral and solo repertoire are what place him as one of the most highly-demanded pianists in prestigious concert halls around the world.

"I built this program on miniatures, beginning with a kaleidoscope of all kinds of human emotions. Chopin was the first to establish the prelude as an independent music form. The challenge of the 24 Preludes is the rapidly changing contrasts, with each individual prelude has a different musical essence, as well as constructing an arch from the first to the last preludes,” says Abduraimov about his programming on December 10. “Then I continue with miniatures, but also program music. Debussy's charming set of six pieces was dedicated to his daughter, not only to entertain her but as a means of Debussy himself seeing the world through a child's eye. I see these as pieces for adults to immerse themselves, too, into the world of children with some nostalgia, and of course, humor. Finally, we have Mussorgsky’s Pictures at an Exhibition which are highly imaginative and give the performer freedom to make music according to actual images and description."

Together with the Luzerner Sinfonieorchester and their chief conductor, James Gaffigan, Behzod recently recorded Rachmaninoff’s  Rhapsody on a Theme of Paganini on Rachmaninoff’s own piano which was brought to the KLL from Villa Senar by kind permission of the Rachmaninoff Foundation. It was at Villar Senar, and on this very instrument, that Rachmaninoff composed this highly popular work. This exciting collaboration has been recorded for Sony Classical and will be coupled with Rachmaninoff’s Symphony No. 3. The recording is due for release later this year.

Click for video of Abduraimov performing Tchikovsky Piano Concerto No. 1 with the Orchestre National du Capitole

“Under the sensitive hands of pianist Behzod Abduraimov, it took on an unusual delicate colouring, the virtuoso high jinks thrown off with balletic grace rather than ostentatious force.” – Daily Telegraph

“Not very many pianists have chosen the tougher cadenza. The mighty Horowitz didn’t. Even Rachmaninoff himself didn’t in his 1939 – 40 recording. Abduraimov did, plunging in with a smashing, unified account full of fire that also left room for subtle touches and finally the most delicate of arpeggios. Abduraimov triumphed again” – Los Angeles Times

In 2019/20 he returns to Carnegie Hall for two performances: his second Stern Auditorium recital, with a programme of Chopin, Debussy and Mussorgsky; and performing Tchaikovsky’s Piano Concerto No.1 with the Münchner Philharmoniker under Valery Gergiev following their concerts in Munich. He also serves as Artist-in-Residence with the Fundação Calouste Gulbenkian, appearing twice under Lorenzo Viotti and in recital.

Other highlights this season include Orchestre National de France, Philharmonia Orchestra, Deutsches Symphonie-Orchester Berlin, Cincinnati and Sydney Symphonies. He will perform in concerto and recital at the Alte Oper Frankfurt and further recitals include the International Piano Series in London, the Meesterpianisten Series at the Concertgebouw Amsterdam, Spivey Hall in Atlanta and the Melbourne Recital Centre, among others.

Behzod and cellist Truls Mørk have developed a formidable duo, with tours in Europe and the US. In 2020 they present Beethoven, Franck and Prokofiev at the Théâtre des Champs-Elysées, Paris and at Kings Place, London, and in autumn 2019 they will record together. Behzod has also established a relationship with the English Chamber Orchestra, whom he directed in Beethoven and Mozart from the piano in 2019. In 2019/20 he will direct Beethoven’s Piano Concerto No.2 with the Camerata RCO as part of the 20th anniversary season of the İş Sanat Concert Hall, Istanbul.

His 2012 debut CD of Liszt, Saint-Saëns and Prokofiev for Decca won the Choc de Classica and Diapason Découverte and his first concerto disc for the label featured Prokofiev’s Piano Concerto No.3 and Tchaikovsky’s Concerto No.1. A film of his BBC Proms debut in 2016, with the Münchner Philharmoniker under Gergiev, was released as a DVD in 2018.

Born in Tashkent, Uzbekistan, in 1990, Behzod began the piano aged five as a pupil of Tamara Popovich at Uspensky State Central Lyceum in Tashkent. In 2009, he won First Prize at the London International Piano Competition with Prokofiev’s Piano Concerto No.3. He studied with Stanislav Ioudenitch at the International Center for Music at Park University, Missouri, where he is Artist-in-Residence.