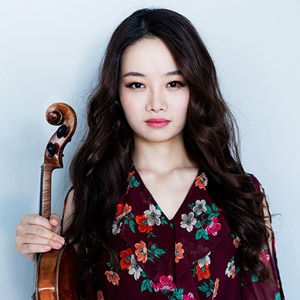 Bomsori Kim is regarded as one of today’s most vibrant and exciting instrumentalists. Winner of the 62nd ARD International Music Competition, Bomsori’s exceptional talent and the poise of her musicianship have been recognized by many of the world’s finest orchestras and eminent conductors. A rising star on the international concert stage, Bomsori is committed to sharing passionate, personal, and refreshing performances of classical violin repertoire with a global audience.

In the 2019-2020 season, Bomsori debuts with the Nashville Symphony, performing Mozart’s Violin Concerto No. 1 under the baton of Giancarlo Guerrero. With Guerrero, she joins the Wrocław Philharmonic as soloist in a multi-city tour of California, performing the Szymanowski Violin Concerto. Additional orchestral debuts include the Lexington Philharmonic led by Keitaro Harada in a performance of Wieniawski’s Violin Concerto No. 2. As a recitalist, she is presented by Rockport Music, University of Maine, National Gallery of Art, and the Carlsen Center. She collaborates with pianist Juho Pohjonen in recitals presented by the Society of the Four Arts and San Francisco Performances and joins pianist Rafał Blechacz for recitals in New York City, Costa Mesa, CA, Toronto and Waterloo. Internationally, she gives recitals at the Rheingau Musik Festival and Heidelberger Fruehling in Germany and Lucerne and Gstaad Menuhin Festivals in Switzerland. International orchestral engagements are with the Luzern and KBS Symphony Orchestras, NDR Radiopihilharmonie, Nürnberger Symphoniker, Deutsche Staatsphilharmonie Rheinland-Pfalz, and Warsaw Philharmonic Orchestra.

In 2017, Warner Classics released Bomsori’s debut album with maestro Jacek Kaspszyk and the Warsaw Philharmonic Orchestra, featuring Wieniawski’s Violin Concerto No. 2 and Shostakovich’s Violin Concerto No. 1. BBC Music Magazine praised Bomsori’s “centered tone and a strong rhythmic thrust,” and The Strad Magazine opined “I can’t remember when I last enjoyed this concerto so much.”  In 2019, Bomsori and pianist Rafał Blechacz released a disc of French and Polish music on the Deutsche Grammophon label. Featuring works by Fauré, Debussy, Chopin and Szymanowski, “this well-constructed programme perfectly showcases the strengths of both players, who command brilliant virtuosity, impeccable musicianship and a compelling vision.” (Music Web International)

A native of South Korea, Bomsori is a graduate of Seoul National University, where she studied with Young Uck Kim. She earned her Master of Music at The Juilliard School, as a student of Sylvia Rosenberg and Ronald Copes. With the support of Kumho Asiana Cultural Foundation, she currently plays on a 1774 violin by Joannes Baptista Guadagnini.