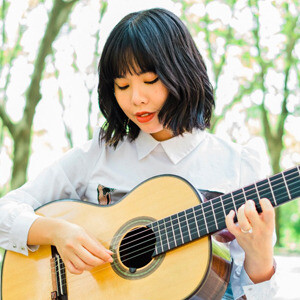 Applauded by the Calgary Herald as "…talented, sensitive…brilliant," JIJI is an adventurous artist known for her virtuosic performances that feature a diverse selection of music, ranging from traditional and contemporary classical to free improvisation, played on both acoustic and electric guitar. Named by the Washington Post in its list of "composers and performers who sound like tomorrow," JIJI also performs her own compositions which incorporate electronic media and acoustic music.

Through her impeccable musicianship, compelling stage presence, and constant premieres of new musical works, JIJI’s intriguing programming solidifies her reputation as a 21st century guitarist. After becoming the first guitarist to win the Concert Artists Guild Competition 1st prize in 30 years, JIJI was granted a BMI commissioning fund, awarded for her outstanding performance in the competition. Using this fund, JIJI commissioned Nina C. Young to write her a new guitar piece for premiere in an upcoming performance. Additional commissions include Natalie Dietterich's light, beloved and Hilary Purrington's Harp of Nerves, both debuted by JIJI at Carnegie Hall with the New York Youth Symphony and the American Composers Orchestra, respectively.