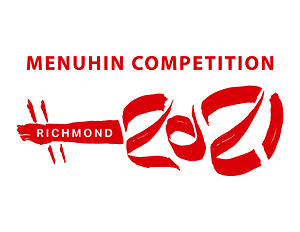 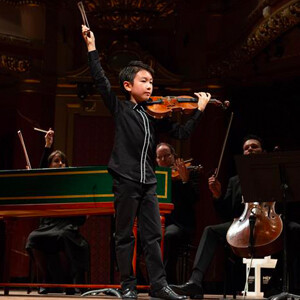 The Menuhin Competition Richmond 2021 and the Richmond Symphony announced today the schedule of events for this year’s Competition, May 14-23, 2021. After a year of waiting necessitated by the global pandemic, the Competition welcomes the exceptional young violinists originally selected to participate in the Menuhin Competition Richmond 2020. Finally, they will have a chance to perform via video recital for the jury, for each other and for a virtual audience of family, friends, teachers and music lovers around the globe.

The co-hosts—the City of Richmond, Richmond Symphony, University of Richmond, Virginia Commonwealth University and VPM, Virginia’s home for public media—are looking forward to providing a warm “virtual” welcome to the young violinists from around the world taking part in the Competition.

Richmond Mayor Levar M. Stoney has been a driving force behind bringing the Menuhin Competition to Richmond and has expressed his tremendous pride in welcoming this prestigious international event to the city. “We look forward to thousands of viewers from around the world joining us online and in spirit to celebrate extraordinary violin performances by talented American and international musicians and guest artists,” he said. 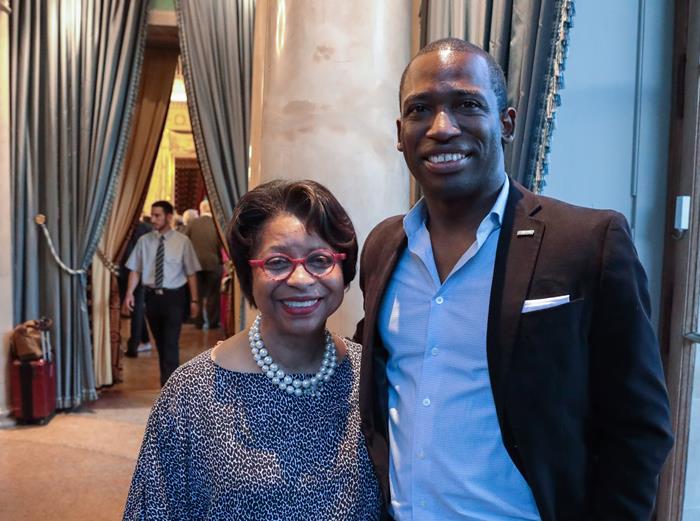 Richmond Mayor Levar M. Stoney and Dr. Betty Neal Crutcher at the Menuhin Competition 2018 Gala in Geneva for the announcement of Richmond as the next host city of the Competition

A special feature of the 2021 program is TwoSet Violin, the irreverent Australian duo Brett Yang and Eddy Chen, whose YouTube videos have made them an internet sensation. The duo will make a virtual appearance (or two, or three) during the Competition in classic TwoSet style, causing mayhem and confusion along the way, but always rooting for the brave young competitors! 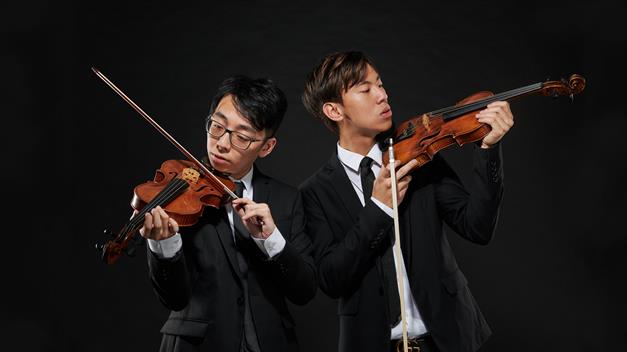 The First Rounds of Competition performances will be released in advance of the main Competition, with the Junior section scheduled for April 26-27 at 10 am EDT and the Senior section at 10 am EDT on April 28-29.  Ten Juniors, ages 12 to 15*, will advance to the Junior Semi-Finals to be streamed on May 15, and nine Seniors, ages 16-22*, will advance to the Senior Semi-Finals to be streamed on May 16.  The Junior and Senior Finals will be held on May 21 and 22, respectively, and will be hosted by Fred Child, public radio personality and longtime host of “Performance Today.” The Competition repertoire includes two pieces commissioned by the Richmond Symphony for the Competition; Junior finalists will perform Mason Bates’ Bound Away, and Senior semi-finalists will perform a new work by Mark O’Connor.
*Competitors are participating in the same section for which they qualified in 2020, even if they have aged out in the intervening year.

The 43 competitors in the Menuhin Competition Richmond 2021 come from around the world, and their performances, via video file, are being submitted from a host of countries: Austria, Australia, Brazil, Canada, China, France, Germany, Italy, Japan, Poland, Russia, Singapore, South Korea, Spain, Switzerland, Taiwan, Ukraine, the United Kingdom and the United States. Of those who are in the United States, competitors hail from California, Florida, Illinois, Kansas, Massachusetts, New Jersey, New York, Ohio, Pennsylvania, South Carolina, South Dakota, Texas and from the home of this year’s Competition, Virginia.

A full list of Richmond 2021 Competitors can be found here. 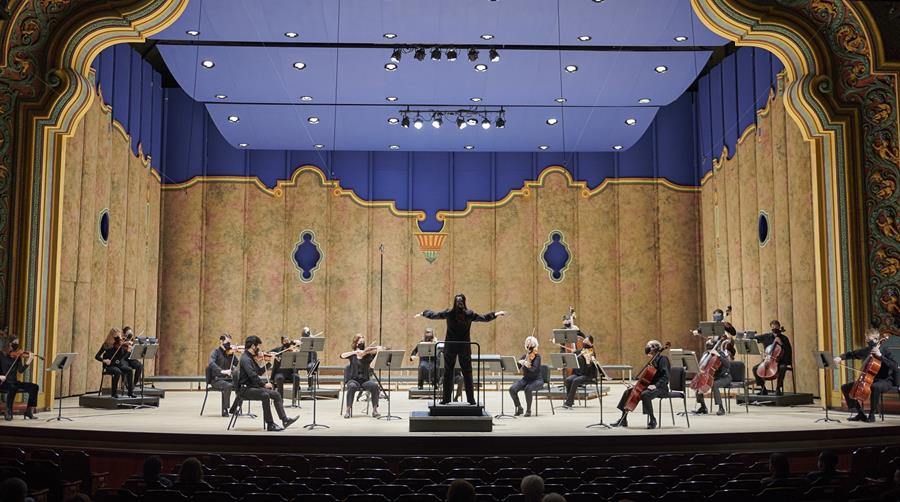 On Friday and Saturday May 14 and 15, the Richmond Symphony performs a live, in-person concert to kick off the Competition from the host city. The renowned conductor Jahja Ling joins the Symphony as guest conductor, and violinist and juror Angelo Xiang Yu, winner of Senior 1st Prize in the 2010 Menuhin Competition in Oslo, performs Mozart’s Violin Concerto No 3.  The concert also features the world premiere of Mason Bates’ Bound Away, the short work commissioned by the Richmond Symphony for this year’s Junior finals, and Jessie Montgomery’s Starburst.  Although no livestream is available, selections from the concert will be streamed on May 23 as part of the Gala Presentation.

Throughout the Competition, a roster of artists will offer virtual concerts and programs that bring together a wide variety of music and violin styles.

More detailed information about the events can be found in the chronological listing below.

In addition to the public programs, the Competition is collaborating with the new Richmond Symphony School of Music to offer educational and engagement activities for local Richmond- and Virginia-based violin students. On May 8 Virginia Commonwealth University (VCU) presents a virtual “Violin Day” with Mark O’Connor, offering workshops and short performances designed for both students and teachers throughout the day.  As part of the Adopt a Performer program, competitors make virtual visits to schools and other community organizations to perform and talk with students and seniors. For competitors, there will be interactive sessions with Intermission, a program founded by two Sphinx Virtuosi violinists that combines meditation, yoga and mindfulness to promote the physical and mental wellbeing of musicians. Also offered to competitors is a masterclass and presentation focused on injury prevention given by juror Pamela Frank and physical therapist Howard Nelson.

The Menuhin Competition distinguishes itself among competitions not only with the high level of playing among participants, but also for creating a festive, nurturing and collegial environment and providing an immersive musical experience for competitors that goes far beyond the Competition rounds themselves. The 2021 virtual Competition aims to fulfill that promise by recreating the Competition as an online event that connects competitors, jurors, viewers and performers with each other and with Richmond. 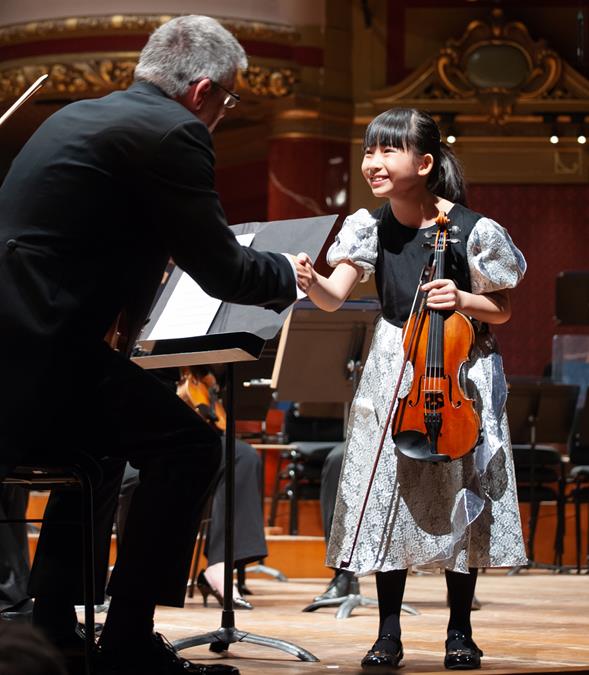 The search for the next generation of great artists begins with the first round of pre-recorded entries, shared each day at 10 am EDT. Young musicians from around the world perform a recital of works for solo violin and/or violin with piano accompaniment. The repertoire covers three centuries including works by Bach, Kreisler, Mozart, Paganini, Rode, Schubert and Telemann as well as each Senior competitor’s choice of a recently composed work for solo violin.  Junior and Senior semi-finalists will be announced after the last competitor in each section, on April 27 and 29, respectively.

This concert in Richmond kicks off the Menuhin Competition and features the world premiere of Mason Bates’ Bound Away, which will also be performed by finalists in the Junior section. Selections from this evening’s concert will be included in the Competition’s closing broadcast Gala Presentation on May 23. Visit the Richmond Symphony website for more information.

This round gives ten young musicians from all over the world an opportunity to demonstrate the diversity of their playing, with a Beethoven sonata with piano, the competitor’s choice of a virtuoso work, with or without piano, and a recently composed work for solo violin.

Nine Senior semi-finalists play for their place in the coveted Senior Finals. This round sees each violinist give world premiere performances of a new commission by Mark O’Connor, the 1st movement of a Mozart concerto including a new cadenza composed by each semi-finalist, as well as a virtuoso work of their choice with or without piano. 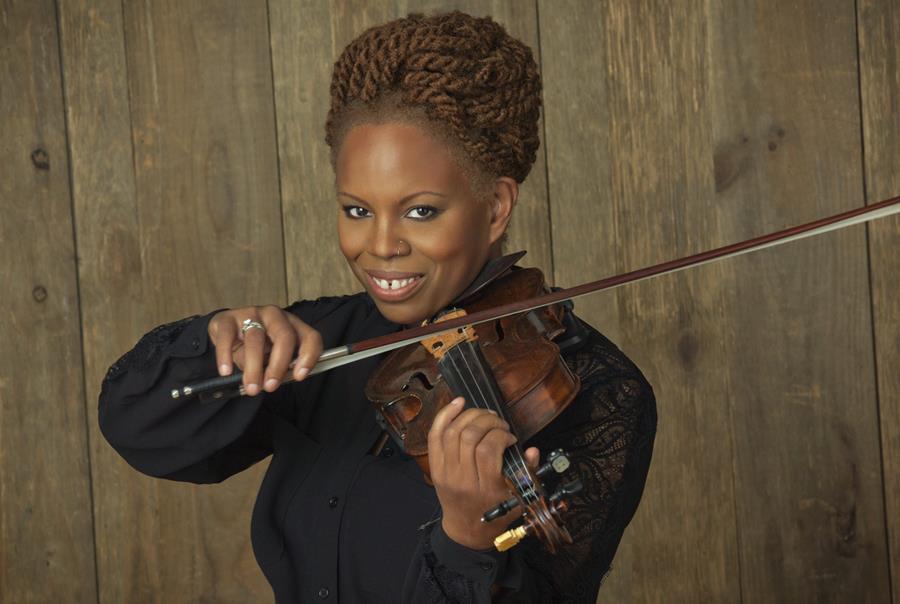 The American jazz violinist Regina Carter has a career that defies categorization. She performs jazz, R&B, Latin, classical, blues, country, pop, African, and more; in each genre, she explores the power of music through the voice of the violin. She is a multi-GRAMMY nominee and recipient of a MacArthur “genius” award and a Doris Duke Award. She has been widely hailed for her mastery of the violin and her drive to expand its possibilities. Presented in collaboration with the Richmond Jazz Society. This concert is in memory of Joe Kennedy, Jr., former violinist in the Richmond Symphony and considered by many to be the “father of jazz” in Richmond.

This concert showcases the remarkable musical mastery of the joint winners of the Geneva 2018 Junior 1st Prize with a short recital from each one. Chloe Chua, now 14, performs Ysaÿe’s Sonata in D minor, Wagner’s Romance from Albumblatt, Heifetz’s arrangement of Gershwin’s “It Ain’t Necessarily So” and Chausson’s Poème. Thirteen-year-old Christian Li performs Grieg’s Sonata No. 3, Fauré’s Après un rêve, and Sarasate’s Caprice Basque.

The American fiddling legend Mark O’Connor is joined by his wife Maggie O’Connor to offer a violin duo concert, highlighting Virginia’s own fiddling roots through their music. The program offers a broad and interconnecting collection of American music through violin/fiddle solos and duos, with additional music for guitar, mandolin and voice. 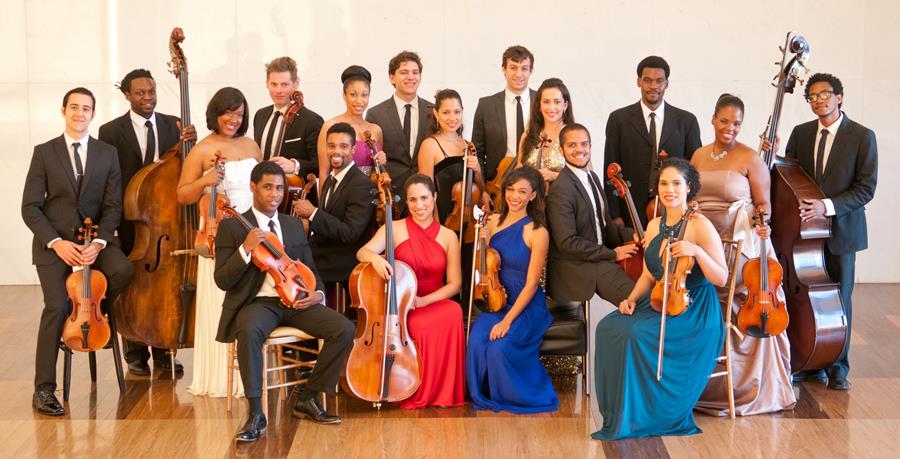 The Sphinx Virtuosi is one of the United States’ most dynamic professional chamber orchestras. Comprised of 18 of the nation’s top Black and Latinx classical soloists, primarily alumni of the internationally renowned Sphinx Competition, these artists come together as cultural ambassadors to reach new audiences. As one of the featured artists at the Menuhin Competition, this concert showcases their mission of advancing diversity in classical music by presenting varied programs of works by composers of color alongside well-known masterpieces.

Friday May 21, 3:30PM
The Danger of a Single Story: The Importance of Diversity, Equity & Inclusion in the Arts and their Role in Society

Aaron Dworkin, 2021 juror, violinist, and founder of the Sphinx Organization, leads a panel discussion jointly hosted by the University of Richmond and Virginia Commonwealth University and facilitated by University of Richmond President Dr. Ronald Crutcher. The discussion will center around the role and importance of diversity in art – not only in music, but also in dance and visual art. The panel will include representatives from Virginia Commonwealth University, Virginia Museum of Fine Arts and the Richmond Ballet.

Five of the world’s best young violinists under the age of 16 will compete for one of the coveted prizes; Fred Child, the long-time host of public radio’s “Performance Today,” is master of ceremonies. Each finalist will perform Bound Away, a new commission written by Mason Bates; the first movement of a Classical or Romantic concerto with a cadenza of their choice, with piano accompaniment; and a solo or accompanied piece chosen by the competitor. The members of the virtual audience will also have the opportunity to vote for a finalist to be awarded the Audience Prize.  The prizewinners will be announced at the end of the evening.

The Competition culminates with the Senior finalists of the Menuhin Competition Richmond 2021; Fred Child, the long-time host of public radio’s “Performance Today,” is master of ceremonies. Four of the world’s best young violinists perform the first movement, with piano accompaniment, of Lalo’s Symphonie Espagnole, Mendelssohn’s Violin Concerto, Saint-Saëns’ Violin Concerto No. 3, or Wieniawski’s Violin Concerto No. 2. Each finalist also performs the second movement of a Mozart Violin Concerto and a piece of their choosing as they enter the final stage of their journey to be awarded one of the sought-after prizes. The members of the virtual audience will also have the opportunity to vote for a finalist to be awarded the Audience Prize.  The prizewinners will be announced at the end of the evening.

The complete list of prizes will be virtually presented, including the Audience Prize, in a celebratory event leading up to the Gala Presentation.

About the Menuhin Competition Trust
The Menuhin Competition is the world’s leading international competition for young violinists, held every two years in a different city (most recently in Geneva in 2018, London in 2016, Austin, Texas in 2014, Beijing in 2012 and Oslo in 2010). Founded by Yehudi Menuhin in 1983, the Competition attracts hundreds of entries from countries across the globe, choosing only 44 of the world’s very best young violinists to participate. The Competition discovers, encourages and nurtures exceptionally talented young musicians from all corners of the globe under the age of 22 to develop into the next generation of great artists.

Thank you to our funders and partners, who have pledged their continuing support to Menuhin Competition Richmond 2021.