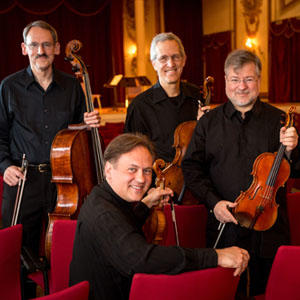 The Orion Quartet is one of the leading chamber music ensembles on the classical music scene today.  Admired for the diverse nature of programming that juxtaposes masterworks of quartet literature with key works of the 20th and 21st centuries, the Orion provides singularly rich dimension to its music-making.  The members of the Orion String Quartet—violinists Daniel Phillips and Todd Phillips, brothers who share the first violin chair equally, violist Steven Tenenbom, and cellist Timothy Eddy—have worked closely with illustrious musicians, such as Pablo Casals, Sir András Schiff, Rudolf Serkin, Isaac Stern, Pinchas Zukerman, Peter Serkin, members of the ensemble TASHI, and the Beaux Arts Trio, as well as the Budapest, Végh, Galimir, and Guarneri String Quartets.  The Orion String Quartet are Artist Members of the Chamber Music Society of Lincoln Center.

In the summer of 2021, the Orion String Quartet returned to live performing at the Santa Fe Chamber Music Festival, with which it has enjoyed a long association, to perform three programs that included music by Dvořák, Haydn and Bartók.  In the 2021-22 season, they will appear in the Chamber Music Society of Lincoln Center’s Winter Festival in March, performing selections from Marsalis’ At the Octoroon Balls and Milhaud’s La Création du Monde. The Quartet’s concerts this season also include appearances with the Phoenix Chamber Music Society and the Philadelphia Chamber Music Society (music by Haydn, Bach, Bartók and Beethoven), and with Linton Chamber Music in Cincinnati, where their concert includes Reger’s Clarinet Quintet with Anthony McGill and music by Beethoven).

In April 2021, the Quartet performed a livestreamed concert from The Rose Studio with the Chamber Music Society of Lincoln Center. In the 2019-20 season, before concert halls shut down in March 2020 due to the pandemic, the Quartet performed with Chamber Music Pittsburgh (Currier’s Etudes and Lullabies along with music by Haydn, Kreisler and Beethoven) and at the Philadelphia Chamber Music Society (including Dvořák’s String Sextet in A Major, Op. 48 along with violist Kim Kashkashian and cellist Marcy Rosen).

During the Quartet’s 30th-anniversary season in 2017-2018, the group celebrated at principal chamber music series throughout North America. They played the complete Beethoven string quartets in a series of six concerts at Mannes School of Music, where they held the position of  Quartet-in-Residence for 27 years; and at the Chamber Music Society of Lincoln Center they performed in an all-Haydn program and presented a contemporary music concert of works written for the group, including the world premiere of Sebastian Currier’s Etudes and Lullabies (a commission by the Chamber Music Society), David Dzubay’s “Astral” Quartet No. 1 for Strings, and Brett Dean’s Quartet No. 2 for Strings and Soprano And once I played Ophelia.  New music specialist Tony Arnold joined the Orion in that concert as vocal soloist.

The Orion String Quartet has given stimulus to the development and expansion of the string quartet repertoire through commissions from composers Chick Corea, David Del Tredici, Alexander Goehr, Thierry Lancino, John Harbison, Leon Kirchner, Marc Neikrug, Lowell Liebermann, Peter Lieberson, and Wynton Marsalis.  As a hallmark of its 25th anniversary, the Orion collaborated with the Bill T. Jones/Arnie Zane Dance Company in a two-week project that featured music by Mozart, Schubert, Mendelssohn, and Ravel, and Beethoven.  WQXR’s The Greene Space produced a live broadcast of the collaboration, including the performance and a discussion among members of the Orion Quartet and choreographer Bill T. Jones.

The Orion String Quartet was established in 1987 and takes its name from the Orion constellation as a metaphor for the personality each musician brings to the group in its collective pursuit of the highest musical ideals..

“The persuasive power of [their] performance came from the exquisiteness and eloquence the four players brought their lines...but it also came from how all of them phrased together— and, it seemed, breathed together. The Orion Quartet is a configuration of particular sensitivity and bravado.”
– The New York Times

“The Orion performed with confidence, precision, fluidity and surprising wit. The ensemble's style is tightly cohesive, with attention to nuance and crisp ornamentation.” – The Los Angeles Times