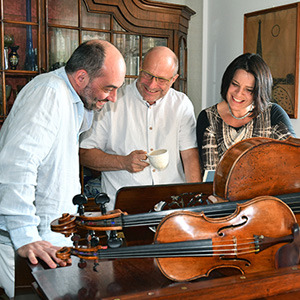 The Smetana Trio, founded in 1934 by the legendary Czech pianist Josef Pálenícek, violinist Alexandr Plocek and cellist František Smetana, is today’s foremost Czech chamber ensemble. Currently comprised of Jitka Cechová (piano), Jan Talich (violin), and Jan Pálenícek (cello), the Smetana perpetuates the interpretational ideals created by its illustrious predecessors as well as other superlative 20th-century soloists active in chamber music. “There is nothing routine about the Smetana Trio’s approach to this engaging repertoire. Every aspect of their interpretation is carefully considered without losing an ounce of spontaneity. Individual lines are remarkable for their focus and beauty, though the powerful sense of ensemble is never sacrificed to individual display.”  - BBC Music Magazine

Following a triumphant, multi-city North American tour in the 2017-2018 season, the Smetana Trio returned to the United States in spring 2019 with programs including piano trios by Rachmaninoff, Martinů, Dvořák, Novak, and Smetana.  Highlights from this tour included performances at the University of Oregon, Friends of Chamber Music Vancouver, and Queen’s University in Ontario.  Overseas, the Trio embarked on several European tours with performances throughout the Czech Republic, Germany, Switzerland, Italy, and the United Kingdom, where the Trio was presented by London’s Wigmore Hall.  The Trio returns to North America in the 2022-2023 season.

With an impressive discography of nearly a dozen albums recorded exclusively for Supraphon since 2000, the group’s recordings include an album featuring the complete piano trios of Shostakovich and Ravel, and an all-Dvořák disc which received BBC Music Magazine’s Chamber Award for 2007 and the French Diapason d'Or. Additional discs include works by Smetana, Tchaikovsky, Mendelssohn and Schubert. In 2019, the group released a new album of late-19th century piano trios by Zemlinsky, Rachmaninov, and Arensky. In spring 2017, the Smetana Trio was voted to win the BBC Music Magazine Chamber Award for its recording of the complete trios by Bohuslav Martinů, released by Supraphon Records in March 2015. The acclaimed recording received such recognition as BBC Music Magazine’s June 2016 Recording of the Month, Sunday Times Recording of the Week, Diapason d'Or award, and a review on theArtsDesk.com opining “this is the greatest chamber disc I’ve heard in ages, and I can’t imagine a better introduction to Martinů's music.”