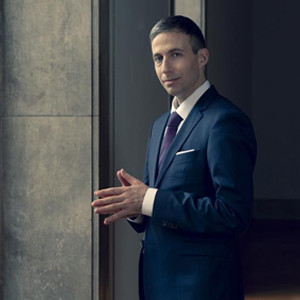 The internationally acclaimed pianist and conductor Benjamin Hochman will be joined by a stellar group of musicians and vocalists at 92nd Street Y's Buttenwieser Hall on Friday January 24, at  8:00 p.m. for two great works of musical storytelling: Schoenberg's Pierrot Lunaire and Janáček's Diary of One Who Disappeared.  This is the second of two concerts Hochman is performing this season - as part of 92Y's "Inflection" Series - that explore the relationship of words and music.

The sublime mezzo-soprano Jennifer Johnson Cano and distinguished tenor William Ferguson will join Hochman in a performance of Leoš Janáček’s Diary of One Who Disappeared. (This is the first time Hochman and Cano have performed together.) For Schoenberg’s Pierrot Lunaire, Hochman will be joined by a true living legend, soprano Lucy Shelton, with an instrumental ensemble featuring Tara Helen O’Connor, flute; Romie de Guise-Langlois, clarinet; Jennifer Frautschi, violin; and Raman Ramakrishnan, cello.

Pierrot (1912) and Diary (1920) were written within a decade of each other, but display completely contrasting musical styles. "Yet," says Hochman, "they share a unique and idiosyncratic approach to words; both tell stories through musical styles that actually emerge from the language. In Diary, the Czech language directly influences the music, and in Pierrot, Schoenberg creates a new way of using the voice, halfway between speaking and singing, which came to be known as Sprechstimme."

Janáček's Diary is the deeply moving, mysterious tale of an ill-fated love between a country lad and a gypsy girl -- a story that reflects Janacek's passion for a woman 40 years his junior. The music is suitably intense and full of emotion, and unmistakably influenced by the sound and cadence of the Czech language. Hochman notes that in Diary, as in Janáček’s operas, "one feels that the music is emerging from the text, reacting to the story but also using the language itself to create the  music."

Schoenberg’s Pierrot Lunaire is a masterwork that has had a tremendous impact on 20th-century music; Hochman calls it "ravishing - full of color, imagination, and wild and brilliant ideas." The text is a German translation of Albert Giraud’s cycle of poems about the title character. "Pierrot wrestles with love, life, and art," says Hochman, "and the music is alternately mad, dark, vulgar, playful, ironic, decadent."

ALSO IN JANUARY
Benjamin Hochman with the Greenwich Symphony

On January 11 and 12, Hochman joins the Greenwich Symphony in Greenwich, CT, for Schumann's Piano Concerto in A minor, Op 54. Also on the program are Verdi's Overture to La Battaglia di Legnano and Korngold, Symphony, Op. 40.