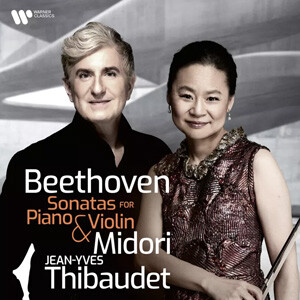 Violinist Midori, celebrating the 40th Anniversary of her professional debut, releases Beethoven's Sonatas for Piano and Violin together with pianist Jean-Yves Thibaudet on Warner Classics. The recording is available now digitally and will be released on CD in January 2023.

For immediate release – New York, NY – Over ten sonatas, spanning fifteen years of Beethoven's life, Beethoven Sonatas for Piano & Violin sees the longtime friends, both artists at the height of their careers, skillfully and artfully interpret a series of works that capture the composer's transition from his early period to the middle period. Midori and Jean-Yves Thibaudet have long been friends, but they had never collaborated with one another until the 2018–19 season, when they toured a recital program of violin sonatas by Enescu, Schumann, Fauré, and Debussy.  The result was a consistent success, and they quickly got to work planning a full tour and recording of Beethoven's violin sonatas in the 2019–20 season, in order to celebrate the 250th anniversary of Beethoven's birth.

The ten sonatas, composed by Beethoven when he was between the ages of 26 and 41, afford a microcosmic view of the composer as he transitioned from his early to his middle period—all the while contending with the growing deafness that would come to dominate his life. Listeners will hear evidence of this transition between styles as the album progresses, in pieces reduced to the bare essentials of piano and violin.

"My journey with Beethoven has been a kind of personal friendship," says Midori, who is a Kennedy Center honoree and this season, celebrates the 40th Anniversary of her professional debut. "Beethoven, who lived a life of struggles, including self-doubts, was never deterred, writing music of incredible beauty and hopefulness. He shows me – shows us – a path through our own challenges. Don't be passive, never give up, be honest and daring by expressing oneself." She continues, "He speaks to me as a companion, reminding me to always strive and stretch, through the good times and bad."

“When you focus on just one composer, you begin to develop a very special bond not only with the music, but with that composer," Thibaudet says. "You go through what happened to them, and see how that impacted their development as an artist. Playing these ten sonatas is like taking a journey through Beethoven's life. It is a very fulfilling and very enriching experience, and I feel closer to Beethoven and his world than I ever did before.”

In addition to the release, Thibaudet and Midori are currently on a tour of the complete sonatas. having begun the tour with a three-day engagement at Dartmouth College, a performance at Chicago's Symphony Center, as well as their most recent performances at Tokyo's Suntory Hall.

Midori is a visionary artist, activist and educator who explores and builds connections between music and the human experience and breaks with traditional boundaries, which makes her one of the most outstanding violinists of our time. She will mark the 40th anniversary of her professional debut this season, celebrating a remarkable career that began in 1982, when she debuted with the New York Philharmonic at age 11.

In concert around the world, Midori transfixes audiences, bringing together graceful precision and intimate expression. This anniversary season is marked by the new recording with Jean-Yves Thibaudet on Warner Classics, Beethoven Sonatas for Piano and Violin and by a project that combines two of Midori's lifelong passions – the music of Bach and newly commissioned music. She performs in a solo recital tour featuring Bach’s six sonatas and partitas for solo violin alongside works by contemporary composers; the tour includes a return to Carnegie Hall in February and concerts in Washington, DC, Seattle and Vancouver, and in San Francisco, Irvine and La Jolla in California. Midori also appears this season with the Boston Symphony Orchestra, National Symphony Orchestra, Buffalo Philharmonic Orchestra, Erie Philharmonic, Toledo Symphony and Glacier Symphony (in Montana).

As someone deeply committed to furthering humanitarian and educational goals, she has founded several non-profit organizations, and last season, she was able to offer programs in person for the first time in two years. Midori & Friends, celebrating its 30th year of service this season, provides music programs for New York City youth and communities, and MUSIC SHARING, a Japan-based foundation, brings both western classical and Japanese music traditions to children and adults in Japan and throughout Asia by presenting programs in schools, institutions, and hospitals. For her Orchestra Residencies Program (ORP), Midori commissioned composer Derek Bermel to write a new piece, “Spring Cadenzas,” which was premiered (mostly virtually) by student orchestras in 2021 and continues to be performed by ORP participants. Through Partners in Performance (PiP), Midori co-presents chamber music concerts around the U.S., focusing on smaller communities that are outside the radius of major urban centers and have limited resources.

For more than three decades, Jean-Yves Thibaudet has performed world-wide, recorded more than 50 albums, and built a reputation as one of today's finest pianists. From the start of his career, he delighted in music beyond the standard repertoire, from jazz to opera, which he transcribed himself to play on the piano. His profound professional friendships crisscross the globe and have led to spontaneous and fruitful collaborations in film, fashion, and visual art.

Thibaudet has a lifelong passion for education and fostering young musical talent. He is the first-ever Artist-in-Residence at the Colburn School in Los Angeles, where he makes his home. In 2017, the school announced the Jean-Yves Thibaudet Scholarships, funded by members of Colburn’s donor community, to provide aid for Music Academy students, whom Thibaudet will select for the merit-based awards, regardless of their instrument choice.

Thibaudet's recording catalogue has received two Grammy nominations, the Preis der Deutschen Schallplattenkritik, the Diapason d'Or, the Choc du Monde de la Musique, the Edison Prize, and Gramophone awards. His most recent album, 2021’s Carte Blanche, features a collection of deeply personal solo piano pieces never before recorded by the pianist. He is the soloist on Wes Anderson’s 2021 film The French Dispatch; his playing can also be heard in Pride and Prejudice, Extremely Loud & Incredibly Close, Wakefield, and the Oscar-winning and critically acclaimed film Atonement. His concert wardrobe is designed by Dame Vivienne Westwood.