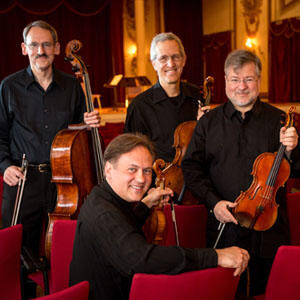 The Orion String Quartet, one of today’s leading chamber music ensembles, will retire at the end of the 2023-24 season, concluding an illustrious 36-year partnership. Violinists Daniel Phillips and Todd Phillips, brothers who share the first violin chair equally, and cellist Timothy Eddy decided to form the quartet in 1987 (with the original violist Catherine Metz), after establishing successful individual careers; Steven Tenenbom became the quartet’s violist in 1993, and their lineup has remained unchanged for nearly 30 years. Some of the music that carries special, personal meaning for the Quartet’s members from their time together includes Bartok’s six quartets, Haydn’s quartets, the later works of Schubert and all of Beethoven’s, and Leon Kirchner’s quartets (Kirchner’s fourth quartet was written for them).

"Having had the privilege for so many years to explore and perform some of the greatest music ever written, we have come to feel that many of these works have actually become a part of our physical and spiritual being,” the Quartet said. “We have chosen to leave our audiences with some final presentations that still fully articulate what we have experienced in this wondrous journey. We look forward to continuing to reach out to inspire people with our recordings, individual performances, and our love of teaching."

Their final concert as a Quartet will take place at the Chamber Music Society of Lincoln Center in Spring 2024. The members of the quartet plan to continue pursuing their individual careers as soloists and chamber musicians, and to continue teaching at the various schools with which they are affiliated, including The Juilliard School, The Curtis Institute of Music, Manhattan School of Music, Mannes College, Queens College, Bard College, Rutgers University and Cleveland Institute of Music.

The Orion String Quartet was established in 1987 and takes its name from the Orion constellation as a metaphor for the personality each musician brings to the group in its collective pursuit of the highest musical ideals. Over the course of their career, the Quartet has been admired for diverse programming that includes not only the masterworks of quartet literature that initially brought them together as a quartet, but also key works of the 20th and 21st centuries, and new commissions.  The Quartet has contributed to the development and expansion of the string quartet repertoire with 20 commissions, having premiered work by composers including Chick Corea, Brett Dean, Alexander Goehr, Aaron Jay Kernis, Leon Kirchner, Wynton Marsalis, Marc Neikrug, John Harbison, and Peter Lieberson. (A complete list of their commissioned work is available here.)

Over the decades, the members of the Quartet have had inspiring collaborations with numerous artists including Peter Serkin, Pablo Casals, Sir András Schiff, Rudolf Serkin, Isaac Stern, Pinchas Zukerman, Leon Fleisher, members of the ensemble TASHI, the Beaux Arts Trio, and the Budapest, Végh, Galimir, and Guarneri String Quartets.  The Orion String Quartet are Season Artists of the Chamber Music Society of Lincoln Center.

Throughout their career, the Orion Quartet have developed special projects and collaborations that aimed to bring chamber music to new audiences. As part of their 25th anniversary in 2013, the group collaborated with the Bill T. Jones/Arnie Zane Dance Company in a two-week project that featured music by Mozart, Schubert, Mendelssohn, and Ravel, and Beethoven. It was presented at The Greene Space and on WQXR and included a discussion among members of the Orion Quartet and choreographer Bill T. Jones.

Another major project was Beethoven 2000, a series of six free concerts presented by CMS as a “millennium gift to the city of New York,” in which the quartet performed (without a fee) all 16 Beethoven quartets as a cycle for the first time.  There was an enormous response to the series, with lines around the block of those hoping to procure last-minute (returned) tickets. The concerts supported six nonprofit children’s educational organizations in New York by providing free tickets to their constituents, offering outreach programs in advance of the concerts, honoring one organization at each concert and encouraging donations. The participating organizations included established institutions such as the Brooklyn Children’s Museum and Harlem School of the Arts as well as smaller, newer organizations, such as the Songs of Love Foundation, which creates personalized songs for children facing illness and other challenges.

The Orion Quartet's recordings reflect its musical diversity. The ensemble has achieved an enviable reputation for its interpretations of Beethoven's string quartets and has recorded the complete cycle for KOCH International Classics. Its 2010 Bridge Records release of various Peter Lieberson works featured the premiere recording of the composer’s Piano Quintet with Peter Serkin. In addition to the complete Beethoven quartets, the Orion released Leon Kirchner's complete string quartets on Albany Records. Past recordings also include Wynton Marsalis's first classical composition for strings, At the Octoroon Balls (String Quartet No. 1) for Sony Classical, Dvorák's "American" String Quartet and Piano Quintet with Peter Serkin and Mendelssohn's Octet with the Guarneri String Quartet, both on Arabesque.