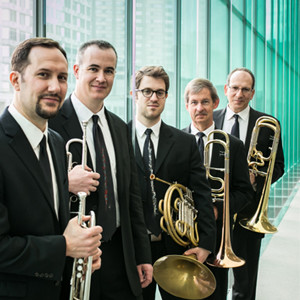 Hailed by Newsweek as “the high priests of brass,” the American Brass Quintet is internationally recognized as one of the premier chamber music ensembles of our time, celebrated for peerless leadership in the brass world. As 2013 recipient of Chamber Music America’s highest honor, the Richard J. Bogomolny National Service Award for significant and lasting contributions to the field, ABQ's rich history includes performances in Asia, Australia, Central and South America, Europe, the Middle East, Canada and the United States; a discography of nearly 60 recordings; and the premieres of over 150 contemporary brass works. Committed to the development of brass chamber music through higher education, the American Brass Quintet has served as Ensemble-in-Residence at The Juilliard School since 1987 and the Aspen Music Festival since 1970.  Its latest album, Perspectives, released in January 2017 on Summit Records, is described by the American Record Guide as “another outstanding ABQ release”; The Gramophone opines, “the American musicians bring utmost cohesion, balance and expressivity to each of the scores they perform with ear-catching intensity and finesse.”

Last season, the Quintet’s U.S. tour brought them to 18 cities in 15 states, including New York, Portland, Savannah and Colorado Springs, among others.  Their highly successful concert tour “Blows the Roof Off Bing” (San Francisco Classical Voice) in Stanford, CA and was praised by Broadway World as “rich, stylish, full-out glorious playing by all concerned”.  This season, the American Brass Quintet appears at the Art Institute of Chicago, University of Idaho, Barrus Concert Hall and Mahaiwe Performing Arts Center, and in Stamford, NY, Norfolk, VA and Bryan, TX.  In a special project presenting a multi-cultural exploration of chamber vocal literature and featuring music of Victoria, Guerrero, and other Spanish composers, the American Brass Quintet collaborates with the GRAMMY® nominated vocal ensemble, Seraphic Fire, and embarks on a U.S. tour in Los Angeles, La Jolla, Kansas City and Goshen, IN, and five cities in Florida including Miami, Boca Raton, Coral Gables, Ft. Lauderdale and Cutler Bay.