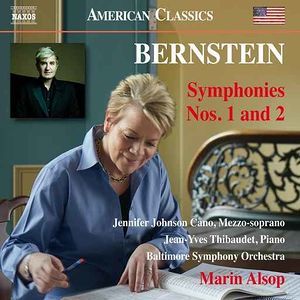 The Baltimore Symphony Orchestra – under the leadership of Marin Alsop – released today an all-Bernstein disc, including his Symphony No. 1: Jeremiah, featuring mezzo-soprano Jennifer Johnson Cano. The performance was recorded live in November 2014 and was highly praised by The Baltimore Sun:

The finale benefited from the riveting contributions of soloist Jennifer Johnson Cano. Her deep, velvety mezzo and impassioned phrasing gave Jeremiah's warnings such startling immediacy that I wouldn't have been surprised to see people in the hall ducking under their seats.