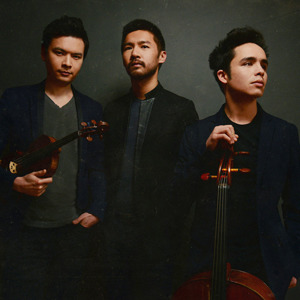 Three visionary next-generation artists combine internationally recognized talents in the eclectic new ensemble, Junction Trio. Since its formation in 2015, the Trio has performed at Washington Performing Arts, Royal Conservatory in Toronto, Newport Classical, the Aspen Music Festival and for the LA Philharmonic's NowRising Series at The Ford Theater. Known for their unique program combinations and vibrant performances, they bring a fresh approach to the repertoire, dazzling audiences with their virtuosity and unity. "Watching the trio perform, one really couldn’t tell who was happier to be there — the rapt audience or the musicians, who threw themselves into repertoire they clearly love...These three are onto something special." (Boston Globe)

This season, the Junction Trio gives debut performances at Celebrity Series of Boston, San Francisco Performances, Friends of Chamber Music Denver, Dallas Chamber Music Society, the Phillips Collection in Washington, DC, People's Symphony Concerts in NYC and at Capital Region Classical in Schenectady, NY. In Denver and in Boston, the group premieres a new work written for them by composer Amy Williams.

2021-2022 season highlights include Rockport, Cliburn Concerts, Shriver Hall and Duke Performances. Past performances in the U.S. have brought them to Cleveland, Philadelphia, Caramoor, Orange County and Emory. In 2021, the Junction Trio was selected by New York’s classical music radio station, WQXR, to be part of their inaugural Artist Propulsion Lab, which allowed them to engage collaborators, tap into new audiences through on-air curation opportunities and commission works.

Admired for combining poetic interpretation with impeccable technique, violinist Stefan Jackiw joins cellist Jay Campbell and pianist and composer Conrad Tao, whom the New York Times has called a musician of “probing intellect and open-hearted vision.” Campbell, too, has been praised by the New York Times as “electrifying,” approaching old and new works with the same curiosity and emotional commitment while Jackiw has been celebrated for his “remarkable purity of tone.”

JULY 2022–AT THE REQUEST OF THE ARTIST, PLEASE DO NOT ALTER WITHOUT APPROVAL