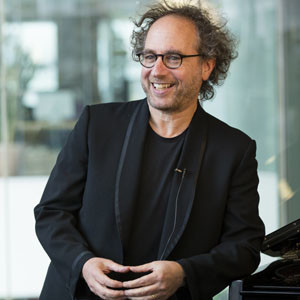 The U.S. Premiere of a revised, updated version of Tod Machover's very first City Symphony – A Toronto Symphony – was scheduled for March 13 at MIT's Kresge Auditorium; it was to be performed by the MIT Symphony Orchestra (MITSO) and conducted by Evan Ziporyn. Due to the COVID-19 pandemic, the campus was closed and the concert was cancelled, but not before students were able to record the piece in the empty concert hall.  On Saturday, May 9 at 7:00 pm, Arts at MIT will offer audiences their first opportunity to experience this new work by Tod Machover when the performance is streamed on Arts at MIT Facebook and Twitter as part of its online weekend concert series.

As part of the same online weekend series, on Friday, May 8 at 7:00 pm, Arts at MIT will offer listeners a very special opportunity to hear Machover's Chomsky Suite for the first time since the piece premiered in 2011. The piece was written for the legendary American linguist and social critic Noam Chomsky and the Kronos Quartet for the FAST Festival in celebration of MIT’s 150th anniversary in 2011.

Philadelphia Voices is the most recent of Machover's City Symphonies, having premiered in 2018.

Machover is a 2012 Pulitzer Prize finalist and winner of Musical America’s 2016 Composer of the Year award. He has long been regarded as one of the most notable trailblazers of 20th and 21st century composition, and one the world’s leading authorities on the vast and evolving relationships between music, technology, and human expression.  He is Muriel R. Cooper Professor of Music and Media at the MIT Media Lab, where he is also Academic Head and Director of the Lab's Opera of the Future group.

A Toronto Symphony (Arts at MIT)

Arts at MIT will stream the U.S. Premiere of a revised, updated version of Tod Machover's very first City Symphony – A Toronto Symphony. The planned March 13 performance was cancelled due to COVID-19. The performance being streamed this weekend was played on the stage of an empty Kresge Auditorium just before the campus was closed. This is the first time that one of Machover’s ground-breaking City Symphonies was to be played outside the original city that commissioned it.

Machover originally created the crowd-sourced work for the Toronto Symphony Orchestra in 2013. The public was invited to record and upload sounds using a series of custom apps that he developed with his research group, Opera of the Future, at the MIT Media Lab. He incorporated collected field recordings, material developed in workshops throughout the city, and contributions from local musicians, including original pieces created by middle-school students with Machover’s graphic composing software Hyperscore. The result of that process was a comprehensive musical portrait of the city, and, in the process of creating the symphony, Machover developed a new participatory mode of composition that he would later bring to different cities around the world.

Last fall, when he brought the piece to MITSO, the student orchestra at MIT, he wanted to add a site-specific element to the work. So Machover collaborated with MIT students to create an entirely new section, which he calls an “MIT Interprets Toronto.” Inserted right before the finale, it serves “as a kind of dream-like recollection of this sonic journey through Toronto, preparing for the big burst of dance-like energy that comes at the end of the symphony,” he says.

"Although we were not able to give the public performance of A Toronto Symphony as planned," Machover said, "I am delighted that these young musicians were able to perform this difficult music so well. I'm also pleased that the piece ’transposed’ smoothly from Toronto to Cambridge (complete with a new section), and that orchestral music, electronics, “found” sounds, and multilayered visuals are combined just as I originally imagined them.” 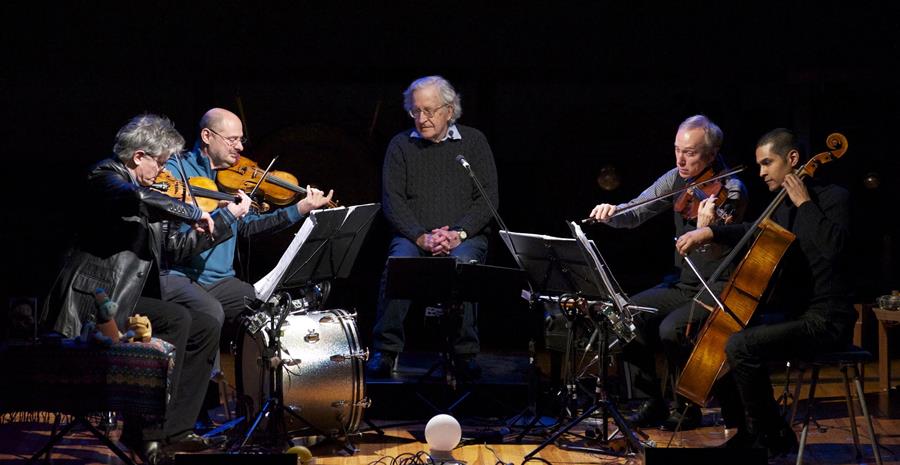 Noam Chomsky and the Kronos Quartet on stage during Chomsky Suite

Chomsky Suite (Arts at MIT)
Friday, May 8 at 7pm

On Friday, May 8 at 7pm, Arts at MIT will offer listeners the first opportunity to hear Machover's Chomsky Suite since its premiere in 2011. The piece was written for and features the iconic American linguist, philosopher and activist Noam Chomsky and the Kronos Quartet.

Machover worked with David Harrington, first violinist of the Kronos Quartet, to develop a series of questions to ask Chomsky live onstage that would elicit his thoughts about and relationship to music and listening. Machover created music for the Kronos Quartet based on Bach’s Cello Suite No.1, which Chomsky had previously indicated was special to him. Machover designed the music to inspire Chomsky to reflect and respond to it, but also to be flexible enough to morph in sonic response -- at the hands of the musicians -- to whatever Chomsky ended up saying. Chomsky did not hear the music in advance, and agreed to participate in the project without knowing exactly what Machover and the Quartet were going to do on stage at the concert.

"It was particularly special," Machover recalls, "because it was an event that could only happen once. Chomsky would never again be able to hear this music 'for the first time' and then respond spontaneously. So I'm thrilled to be able to share this unique moment, especially at a time when Noam Chomsky's wisdom and experience are more important than ever."

The Cheesesteak solo from Philadelphia Voices

Through specially-designed mobile technologies developed by Machover and his Opera of the Future group at the Massachusetts Institute of Technology Media Lab, Machover gave residents of Philadelphia the opportunity to contribute their own samplings of cityscapes, vocalizations, and texts. Machover and his team then reviewed and compiled the material, uniting the richly diverse communities of Philadelphia through sound.  The result was a celebration of the birthplace of American democracy written for, and with, the Philadelphians who know it best.