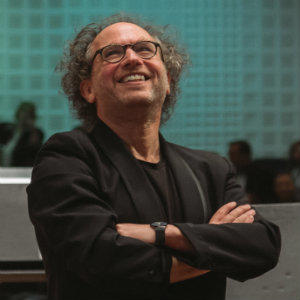 Tod Machover has been named 2016 Composer of the Year by Musical America, the prestigious classical music publication. Joining the ranks of composers who have received this illustrious honor, such as John Luther Adams, Meredith Monk, Arvo Pärt, George Crumb, Steve Reich, Stephen Sondheim, John Adams, and Milton Babbitt, Machover states, "I am very grateful to Musical America for this honor and am thrilled to join a tradition that includes so many composers whose musical imagination and impact I admire." Carnegie Hall will host the annual Musical America Awards on December 8, where Machover is joined by Artist of the Year Yannick Nezet-Seguin, Instrumentalist of the Year Jennifer Koh, Vocalist of the Year Mark Padmore, and Ensemble of the Year BMOP (Boston Modern Orchestra Project). Read the article HERE.

Called "visionary" by the New York Times, Machover will premiere the fifth of his collaborative City Symphony Series - the first in the U.S.- in Detroit in November. Commissioned and performed by the Detroit Symphony Orchestra, led by Leonard Slatkin, Symphony in D, integrates music, sounds of the city, new technology, and the creative participation of numerous citizens of Detroit, of all backgrounds and ages. Machover premiered A Symphony for Lucerne to great critical and public acclaim last month at the Lucerne Festival, where he was this year's Composer-In-Residence.

Machover is the inventor of Hyperinstruments and is known for pushing the boundaries of technology, live performance and the audience experience. He is the composer of many groundbreaking operas including VALIS, the Brain Opera, Resurrection, and the robotic Death and the Powers that was a finalist for the 2012 Pulitzer Prize. Machover is the Muriel L. Cooper Professor of Music and Media at the MIT Media Lab and Director of its Opera of the Future Group. He studied with Elliott Carter at The Juilliard School and was the first Director of Musical Research at Pierre Boulez's IRCAM in Paris.

Tod Machover's music is published by Boosey & Hawkes and has been recorded on the Bridge, Oxingale, Erato, Albany, and New World labels. Much of his music is also available via iTunes.