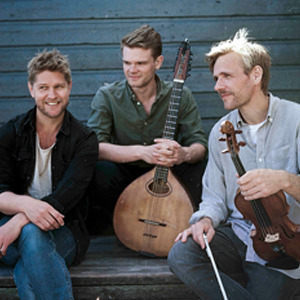 A new driving force in Nordic world music is the young Danish trio, Dreamers’ Circus. Contemporary and endlessly innovative in their approach, they draw inspiration from the deep traditions of folk music in the region and reshape them into something bright, shiny and new. Dreamers’ Circus are: Nikolaj Busk (DK) on piano and accordion, Ale Carr (SWE) on Nordic cittern and Rune Tonsgaard Sørensen (DK), also of the Danish String Quartet, on violin.

Dreamers’ Circus display inventiveness and talent in their approach to performances that include music from Denmark and Sweden as well as Finland, Norway and the far reaches of the windswept Faroe Islands. The ensemble has won five prestigious Danish Music Awards and toured throughout Europe and beyond, with performances in Japan and the Sydney Opera House in Australia. Their first US tour in 2019 opened ears, eyes, minds and hearts. The trio collaborates regularly with the Danish String Quartet and the Copenhagen Philharmonic and performs with other orchestras.

Highlights of the 2022-2023 season include debut performances at Celebrity Series of Boston, San Francisco Performances, two performances at Detroit Chamber Music, two at Music at Dumbarton Oaks in Washington, DC, Brigham Young University, Modlin Center for the Arts in Richmond, and a jointly presented performance by Saratoga Performing Arts Center and Caffe Lena, the oldest folk-oriented coffee house in the U.S. which has hosted artists such as Bob Dylan, Ani DiFranco and Arlo Guthrie. The Trio makes return stops to Bucknell, PA, Orono, ME, Burlington, VT and Portland, OR.

Highlights of the 2021-2022 season included performances in La Jolla, Santa Barbara, Orange County, Montalvo, Indianapolis, Appleton, WI and a return to Longwood Gardens in Kennett Square, PA. In 2020, Dreamers' Circus released their 5th album, Blue White Gold on Vertical Records and was awarded Album of the Year by the Danish Music Awards 2020 and the 2021 Carl Prize for Composer of the Year (Roots music category)

Dreamers’ Circus views their traditional roots as a point of departure and know tradition should not be a straitjacket. This adventurous attitude, coupled with their outstanding musicianship, has brought the band to the forefront of the Nordic folk and world music scene.