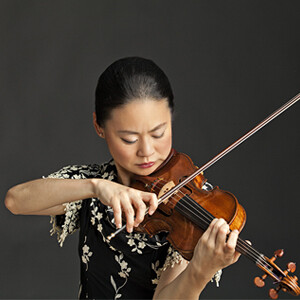 "More than 30 years after bursting on the scene as a pint-size violin prodigy, Midori continues to set an example for how to be an engaged musician in the modern world." – San Francisco Chronicle​

As an artist, activist, and educator, Midori has been exploring the connection between music and the human experience for over 35 years. Since debuting with Zubin Mehta and the New York Philharmonic in 1982 at the age of 11, Midori has appeared with every major orchestra under every major conductor worldwide.

Beyond the concert hall, Midori is a humanitarian in the truest sense of the word. In addition to her role as a United Nations Messenger of Peace, she formed Midori & Friends, which brings high-quality music education to New York City youth, and MUSIC SHARING, a Japan-based program that provides access to both western classical and Japanese music traditions. Her Partners In Performance organization promotes interest in classical music outside of major urban centers across the United States, while her Orchestral Residencies Program, encourages young musicians in the United States and beyond to develop a life-long and multifaceted engagement with the arts.

As an educator, Midori held the Jascha Heifetz Chair as a Distinguished Professor at the University of Southern California’s Thornton School of Music, where she taught for 14 years. She continues her involvement at USC in a visiting artist role as Judge Widney Professor of Music and is a distinguished visiting artist and violin faculty member at the Peabody Institute of Johns Hopkins University, a violin faculty member at the Curtis Institute of Music, an honorary professor at Beijing’s Central Conservatory of Music, and a guest professor at both Soai University in Osaka and the Shanghai Conservatory of Music. Her own degrees in gender studies and psychology from New York University (BA 2000, MA 2005) strongly inform her holistic teaching philosophy: “In our studio, the tenets of Honesty, Health, and Dignity guide us through the times of trial, self-doubt, self-questioning, and growth.”

Midori is represented by Intermusica in Europe, Australia & New Zealand