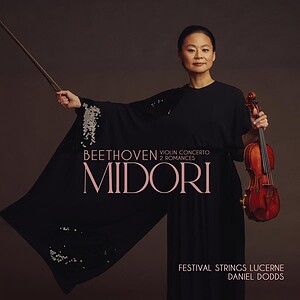 As one of the world’s preeminent soloists, the violinist Midori has been performing on premier stages around the globe for over 35 years. Marking the composer’s 250th birthday in December 2020, this recording of Beethoven’s Violin Concerto, complemented by his two Romances for violin and orchestra, is the latest addition to her substantial discography.

This recording, on which Midori plays with the Festival Strings Lucerne, was made in early March 2020, just before the global pandemic shut-down. The recording sessions had originally been planned around a concert performance with the orchestra at the KKL, Lucerne’s impressive Culture and Congress Centre, and subsequent concerts in the UK, Singapore, China and Korea, but the COVID-19 pandemic caused the cancellation or postponement of the entire tour. The Swiss concert was cancelled with less than 48 hours’ notice; Midori and the orchestra were already in the midst of rehearsals. Midori explains:

As everyone's health and safety were of paramount concern, we were naturally obliged to follow official guidance. Nonetheless, we were grateful to receive permission to move ahead with our recording. Just beyond, a new and dangerous world was lurking – if still in hiding – and I now realize that there was not much of an idea amongst us of a new reality coming into being … In retrospect, the recording experience felt as if we were racing against the clock, to still be making live music, in direct company of each other, breathing in harmony.

Through all of that, Beethoven guided my colleagues and me, his work focusing and inspiring us, our concentrations heightened, enveloped together in our musical efforts ... Beethoven has provided a fortunate focus for me in such fraught times. I am reminded that he was a man of strong beliefs and a morality to which he fully committed, as an activist who took firm stands on many major issues of his day. At the same time he maintained the discipline that allowed him to create profoundly beautiful, often serene music, despite his many personal disappointments and struggles.

Beethoven's determination still provides a model for humankind, leading us to recognize the best in our world as we reach toward the many achievements of which we are all potentially capable. Finding my place, as a musician, interpreting several of Beethoven’s masterpieces, grounds and inspires me today, as we all face so many challenges ahead.

The violinist Midori is a visionary artist, activist, and educator whose unique career has been dedicated to exploring and building connections between music and the human experience. As a leading concert violinist for over 35 years, Midori regularly transfixes audiences around the world, combining graceful precision and intimate expression. Among many significant associations, she has performed with the London, Chicago, and San Francisco Symphony Orchestras, the Sinfonieorchester des Bayerischen Rundfunks, the Berlin and Vienna Philharmonics, and the Mahler Chamber Orchestra. Midori’s diverse discography of more than 20 recordings, includes a GRAMMY® Award-winning recording of Hindemith’s Violin Concerto with Christoph Eschenbach conducting the NDR Symphony Orchestra. Midori is deeply committed to furthering humanitarian and educational goals. She has founded and manages several non-profit organizations, including Midori & Friends, which provides music programs for New York City youth and communities, and MUSIC SHARING, a Japan-based foundation that brings both western classical and Japanese music traditions into young lives by presenting programs in schools, institutions, and hospitals. In recognition of such commitments, she serves as a United Nations Messenger of Peace. Midori was born in Osaka in 1971 and began her violin studies with her mother, Setsu Goto, at an early age. In 1982, the conductor Zubin Mehta invited the then 11-year-old Midori to perform with the New York Philharmonic in the orchestra’s annual New Year’s Eve concert, helping to lay the foundation for her resulting career.