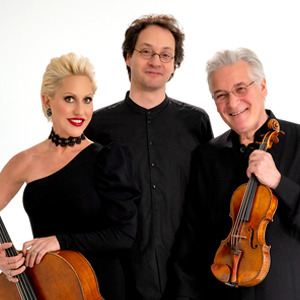 Zukerman Trio
Ensemble | Worldwide Representation
Biography
Tweet
Pinchas Zukerman (Violin); Amanda Forsyth (Cello); Shai Wosner (Piano)
A prodigious talent recognized worldwide for his artistry, Pinchas Zukerman has been an inspiration to young musicians throughout his adult life. In a continuing effort to motivate future generations of musicians through education and outreach, the renowned artist teamed up in 2002 with four protégés to form a string quintet called the Zukerman ChamberPlayers. Despite limited availability during the season, the ensemble amassed an impressive international touring schedule with close to two hundred concerts and four discs on the CBC, Altara and Sony labels.
The Zukerman Trio debuted in 2011 as an alternative to the quintet works with the Zukeraman ChamberPlayers.   In addition to piano trios by Mendelssohn, Beethoven, Dvorak and Shostakovich, programs often include duo performances with various couplings including the Kodaly Duo. Invitations from major Festivals and venues led to the official launch of the Zukerman Trio in 2013.  Since then, the ensemble has traveled around the globe to appear in Japan, China, Australia, Spain, Italy, France, Hungary, South Africa, Istanbul, Russia, and throughout the United States. The Trio regularly performs at the Ravinia Festival, and has appeared at major festivals including the BBC Proms, Edinburgh, Verbier, and Bravo! Vail.
Pianist Shai Wosner began performing  with  Zukerman and Forsyth in 2020. The 21-22 season includes three U. S. Tours, engagements in Banff and Montreal Canada, and a tour of China in May 2022.
*****
With a celebrated career encompassing five decades, Pinchas Zukerman reigns as one of today's most sought after and versatile musicians - violin and viola soloist, conductor, and chamber musician.  He is renowned as a virtuoso, admired for the expressive lyricism of his playing, singular beauty of tone, and impeccable musicianship, which can be heard throughout his discography of over 100 albums for which he gained two Grammy® awards and 21 nominations.
Born in Tel Aviv, Pinchas Zukerman came to America in 1962, where he studied at The Juilliard School with Ivan Galamian. He has been awarded a Medal of Arts, the Isaac Stern Award for Artistic Excellence, and was appointed as the Rolex Mentor and Protégé Arts Initiative's first instrumentalist mentor in the music discipline. A devoted and innovative pedagogue, Mr. Zukerman chairs the Pinchas Zukerman Performance Program at the Manhattan School of Music, where he has pioneered the use of distance-learning technology in the arts.  This fall, he proudly joins Dallas Symphony Orchestra as their new Artistic & Principal Education Partner for the next two seasons. He currently serves as Conductor Emeritus of the National Arts Centre Orchestra of Canada, as well as Artistic Director of its Young Artist Program.
Canadian Juno Award-winning Amanda Forsyth is considered one of North America's most dynamic cellists. Her intense richness of tone, remarkable technique and exceptional musicality combine to enthrall audiences and critics alike. From 1999-2015, Amanda Forsyth was principal cellist of the National Arts Centre Orchestra, where she appeared regularly as soloist and in chamber ensembles. She is recognized as an eminent recitalist, soloist and chamber musician appearing with leading orchestras in Canada, the United States, Europe, Asia and Australia. As a recording artist she appears on the Fanfare, Marquis, Pro Arte and CBC labels.
Pianist Shai Wosner has attracted international recognition for his exceptional artistry, musical integrity, and creative insight. His performances of a broad range of repertoire—from Beethoven and Schubert to Ligeti and the music of today—reflect a degree of virtuosity and intellectual curiosity that has made him a favorite among audiences and critics, who note his “keen musical mind and deep musical soul” (NPR’s All Things Considered). Mr. Wosner is a recipient of Lincoln Center’s Martin E. Segal Award, an Avery Fisher Career Grant, and a Borletti-Buitoni Trust Award. He is on the faculty at the Longy School of Music in Boston.
“The cleanly articulate performance was elevated by an uncommon passion, both in the tender Adagio and in the finale that shifts abruptly from sadness to joy.”
– The Chicago Tribune
“With Pinchas Zukerman’s matchless musicianship and charisma at its core, this is a trio made in heaven.  Amanda Forsyth brings passion and formidable technique as a cellist, and pianist Angela Cheng is the dream accompanist who lives every note.”
– Limelight
AT THE REQUEST OF THE ARTIST, PLEASE DO NOT ALTER THIS BIOGRAPHY WITHOUT PRIOR APPROVAL.
JULY 2021 - PLEASE DESTROY ALL PREVIOUSLY DATED MATERIALS.